“As soon as I had my first bag of popchips, I was hooked.” explained Kutcher. “I reached out to the ceo and told him I had an interest in working with the business and making an investment in the company, but I had three conditions: I wanted to be “President of Pop Culture,” oversee the social media for the brand and have access to an endless supply of popchips for my family and friends.” 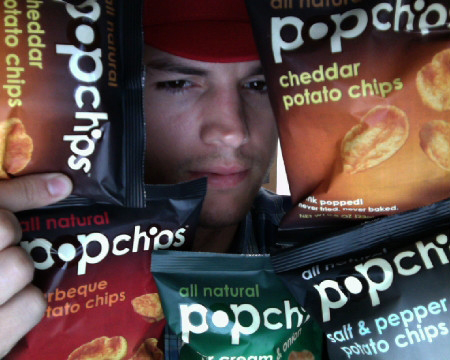 “I’m excited to join the popchips team as their President of Pop Culture and help create imaginative social media campaigns that put the “pop” (and the fun) back into snacking,” said Kutcher.

“We’re thrilled to have one of the most creative, charismatic and trendsetting people in Hollywood join our team,” said Keith Belling, co-founder and chief executive officer of popchips™. “Ashton has proven himself a leader within the new media field, so we are excited to let him loose with a bag of popchips and full access to our social media.”

Kutcher, who is a co-founder of successful media company— Katalyst, has been instrumental in bringing social media to the mainstream. Recently named one of Time Magazine’s 100 Most Influential People in the World, Kutcher has over 5 million followers on Twitter and more than 3 million Facebook fans.

popchips are an all-natural line of popped chips with all the flavor and less than half the fat of fried chips. popchips, inc. was formed in 2007 to bring new flavor and real innovation to the snack aisle. Thanks to the magic of popping, popchips offers a snack so tasty and crispy that you won’t even notice it’s (we hesitate to say) healthier. For more information about the company and its products, pop over to popchips.com, become a fan on facebook or follow us on twitter.