How To Get The Look: Amy Poehler’s Emmy Hair

Did you love Amy Poehler’s laid-back Emmy hair at this year’s awards on September 21st? Here is your chance to get the look with simple tips from the mastermind behind the look – Creative Consultant for the John Frieda Collection, Harry Josh.

Harry’s projection for Red Carpet ’09 Hair – “I think we are going to see a lot of hair down and not as long as in past years. Less layers, more clean brushed, sleek looks.” 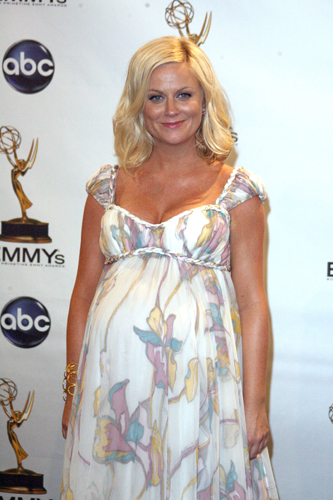 “Amy is so down to earth and doesn’t ever take herself too seriously,” says Harry. “She wanted her hair to fit her personality and also her chic yet simple dress. So we went with a look that was loose and very easy-going.”

Harry’s Quick & Easy How To Get Amy Poehler’s Emmy Hair:

Step 1: Harry started by shampooing her hair with the John Frieda Lustrous Touch Sheer Blonde Strengthening Shampoo and Conditioner to make it silky, then toweled it dry. To give it lots of volume, Harry applied a palm sized amount of the new John Frieda Luxurious Volume Bountiful Body Mousse from root to end to add some volume.

Step 2: Next, he sprayed her roots with the John Frieda Luxurious Volume Lavish Lift Root Booster Spray to give the crown some extra lift. Make sure not to spray the whole head – focus on the roots only – to keep from weighing hair down. Then he blew her hair dry in sections

Step 3: Harry finished with the John Frieda Luxurious Volume All-Out Hold Hair Spray and told Amy to bring the bottle with her in the car. It’s his must-have for red carpet touch ups that he can’t live without.

About Amy Poehler: is an American comedienne and actress. She is a cast member and parody news anchor on the NBC television program Saturday Night Live. In 2005, Poehler starred in the film Mean Girls, alongside Tina Fey, and again alongside her in Baby Mama in 2008.