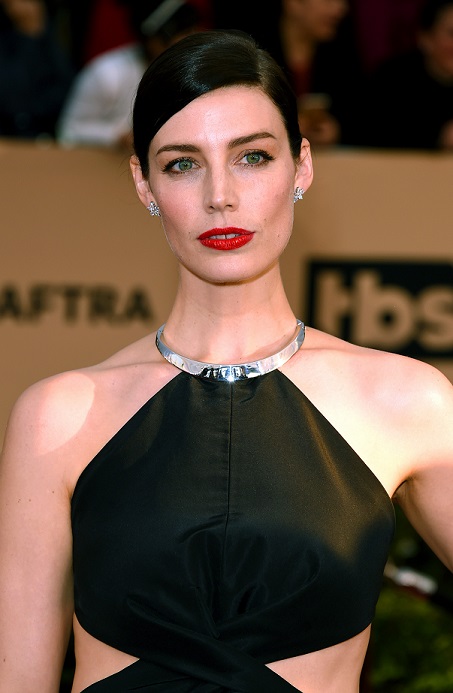 Inspiration: “This look is a modern interpretation of Jessica’s character on Mad Men, a way of paying homage to the show coming to a close. Her dress makes a statement and her hair was off of her face so I thought it was a great time to have a beauty moment. I chose a show-stopping, classic red lip. It is a powerful, sexy look, without being overt or distracting.”

Bhatty prepped with Baby Lips to make sure they were moisturized and supple. She then applied two layers of Color Sensational Vivid Matte Liquid in Rebel Red with a lip brush. Lips were framed with concealer, by dabbing it around the lip line with the hard tip of the Dream Blender.

Eyes: Bhatty wanted to ensure that the lip remained the star so she opted for a glisten-y nude smokey lid. She applied a tiny touch of Master Prime and Master Conceal by FACESTUDIO to her lids, which helped the shadows glisten. She used the pink shades in the top row of The Blushed Nudes Palette on the entire lid followed by the taupey bronze in the first row on the lash line and into the crease just to give a bit of dimension. She applied the darker taupe in the bottom row with a stiff liner brush smudged onto the top and bottom lid. Bhatty curled her lashes and used one coat on the bottom and top of New York Lash Sensational Luscious Mascara followed by a few individual lashes and then another coat of mascara. She finished the look by subtly tapping the Highlighter shade in the NEW Master Contour Face Contouring Kit by Face Studio in the center of her lid.

Brows: Bhatty applied a brow powder first followed by NEW Brow Drama Pomade Crayon in Deep Brown, which she used to shape the brow. She then used a spoolie brush to comb them up giving her strong but not overwhelming brows.

Face: Bhatty hydrated and prepped her skin with serums and creams. She wet the Dream Blender and sprayed it with hydrating face spray. She then mixed a bit of moisturizer with the

Dream Velvet Gel-Whipped Foundation to give a tinted moisturizer effect and applied with the Dream Blender. As the coverage is buildable, she was able to layer as necessary. She used a liquid highlighter on the high points of the face, then set with the Highlighter in the NEW Master Contour Face Contouring Kit by Face Studio on the bridge of her nose, orbital bone, a hint on the inner eye corner, on her shoulders and a tiny bit on her cupids bow. To give her skin a subtly sculpted and highlighted look, she used the Contour shade in the hollow of her cheeks and a touch on her jaw. Bhatty then used the Blush shade with a fluffy brush to create a pink wash on her apples and pulled the color toward her hairline.