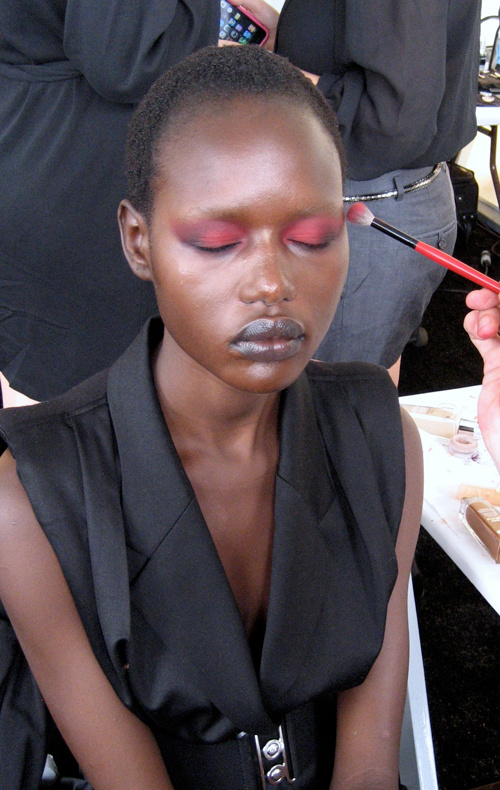 L’Wren Scott was feeling a touch of wanderlust and it showed in her spring collection, which she presented at The Standard Hotel, September 16, 2010. The Serengeti sunset inspired an eclectic palette of rich, intense shades. Sapphire and aubergine gave way to paprika and chartreuse, all set against the designer’s inimitable sleek silhouettes.

The makeup was by Lancôme’s Artistic Director for Makeup Aaron De Mey. Aaron kept with L’Wren’s colorful moment by creating a series of smoky eye looks with a twist. Specially customized shadows—10 intense shades in all—were paired with a glossy pale lip. Aaron started by laying either a matte taupe shadow (for the brighter shades) or a black matte shadow (for the darker shades) across the entire lid and out past the brows. Next, Aaron swept the lids, the inner corners and the lower lashline with the colored shadow. Shades were chosen according to the color of the model’s outfit, explained Aaron. Le Crayon Khôl in Black Ebony rimmed the water line and several coats of Hypnôse Drama Mascara finished the look. This black frame defined the eyes and kept the bright colors from looking “too juvenile,” said Aaron. 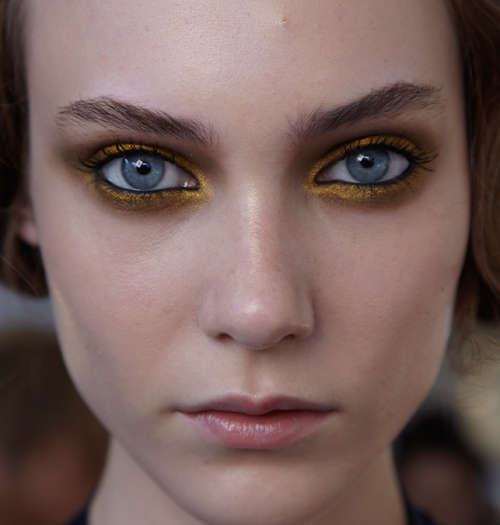 The skin was kept flawless with Teint Miracle Lit-from-Within foundation and layers of gold highlights along the temples and down the center of the face. (Aaron kept the skin blush free.) For the glossy lips, Aaron used a combination of Color Design Lipstick in Oh My (a beige shade with a touch of sheen) and the gold-flecked Juicy Tubes in Touched by Light.

The nails, led by star manicurist Yuna Park, also received a special touch. A handful of the models sported a saffron polish that Lancôme custom blended at L’Wren’s direction. The rest of the models wore Le Rouge L’Wren, from the special L’Wren Scott for Lancôme holiday collection hitting counters in November, 2010. Legendary hairstylist Odile Gilbert amped up the romantic waves by painting the side parts with a bright streak of color—the same as was used on the eyes. By the end of the show, the look was christened “hairliner.”

P.S. Stayed tuned to see if these special eye shadows and saffron nail polish show up in the future as limited edition items! 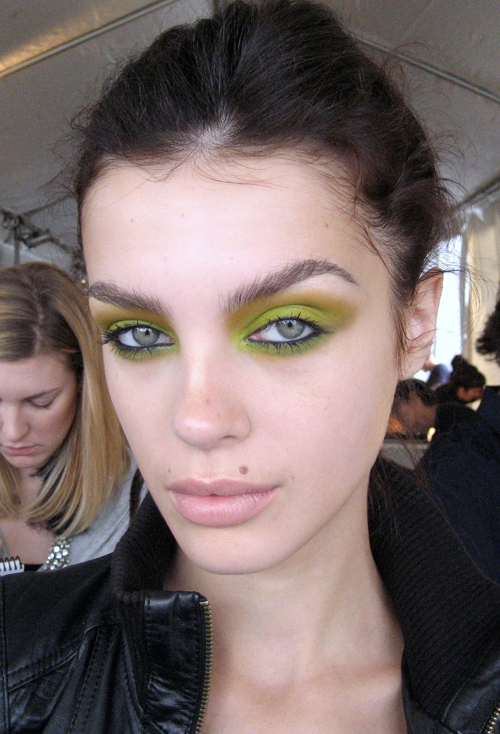 A vivid take on the classic smoky eye