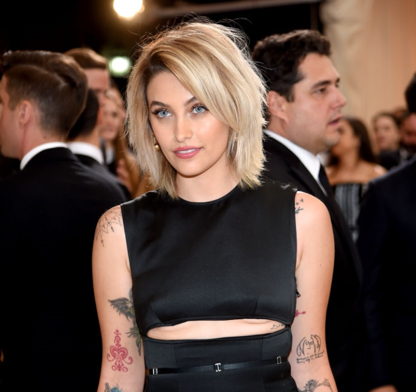 The Skin was prepped with Decléor Purifying Oil Serum, massaged in circular motions into the face, followed by Cream “X” by Mario Badescu and finally Dr. Sturms Hyaluronic Serum.

Charlotte Tilbury Magic Foundation in 4.5 was used with a fluffy brush, buffed into the skin with circular motions. The under eye area and areas around the nose were covered lightly with Laura Mercier camouflage concealer.

To sculpt and define the cheekbones and jawline, Benefit Hoola Bronzer in Hoola and Hoola lite was swiped in the hollows of the cheeks and under the jaw line. For an added bronzed glow, Charlotte Tilburry’s Bronze and Glow was layered on top of the contour.

Glossier’s Cream Highlighter Haloscope in “quartz” was used to highlight the cheek planes and high points of the face, followed by Laura Mercier Highlighter in “indiscretion” used on cheekbones for extra dimension. For a pop of color and warmth, Hourglass Incandescent Electric Blush was swiped on the apples of the cheeks.

Anastasia Beverly Hills Eyebrow Pencil in dark brown and taupe were used to fill in and sculpt the eye brows and set with Bobbi Brown Eye Pencil in brown.

To further define the eyes, Benefit Hoola Bronzer and Dandelion Blush from the Benefit Heek Parade palette were washed lightly over the eyelids. For extra definition, Charlotte Tilbury’s “sophisticate palette” Prime and Enhance shades were swiped under the lower lash line with her rock n kohl eye pencil in “eye cheat” used in the lower waterline to open the eyes. After applying Ardell’s “Demi-Wispies” lashes, cut to fit the outer corners, Charlotte Tilbury’s “full fat lashes mascara” was used on upper lashes and topped off with Marc Jacob’s Featherweight Mascara used on both the upper and lower lashes.

To finish the look, Paris’ lips were lined with Charlotte Tilbury’s Lip Pencil in “pillow talk” and topped off with Hourglass Lipstick Pencil in “activist.”