Alaina Huffman is best known for her role on the Canadian television series Painkiller Jane, in which she played Maureen Bowers. Most recently, Alaina Huffman plays Dinah Lance Black Canary on CW’s Smallville. In this interview, Alaina Huffman talks to Marta Walsh about acting and shares some beauty secrets. 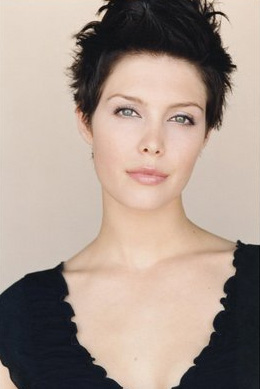 Why have you decided on a career in acting?
Early on in my life I was a model and traveled quite a bit. I was discovered as a model in a local shopping mall in Vancouver, Canada. My parents then got a transfer to Texas. I was living in Germany at the time planning to stay in Europe as a ‘Bohemian Model Chick’. My parents convinced me to leave Europe for Texas. I was under 21at the time and I had the perfect opportunity to receive a Green Card, or a permanent residency in the US. In Texas I discovered a good modeling market while I was putting myself through college. Then a call came in for a movie. I went on an audition and got the role. I then got involved in local film festivals in Texas. Clearly acting was something I enjoyed a lot which at the end triggered me to move to Los Angeles. 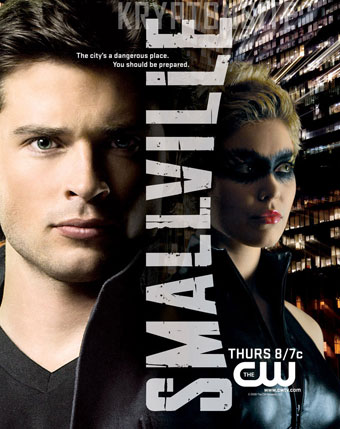 How do you like living in LA?
I feel more at home in LA. I used to live in Tokyo and in Germany and it was much bigger shock coming to Texas than any of these International cities. Although at the end I enjoyed living in Texas, I still consider LA as my home. I have 2 kids who were both born in LA. Most of my friends are stay home moms, which allows me to have a life outside the acting world.

What acting roles are working on at the moment?
Right now I have a recurring character in Smallville. It’s called The Black Canary and she is part of the DC Comics franchise. The season premier for Smallville was aired on CW, September 18th 2008. I just finished guest star roles in CSI Miami which was aired this month. In addition I have a role in a movie called: Jack Hunter. Ivan Sergei also stars in Jack Hunter. The film is about an ancient Egyptian culture, sort of like Indiana Jones type of adventure movie. Jack Hunter was shot in Turkey which was a lot of fun.

Which acting role was your favorite so far?
All of my acting roles are equally my favorite. The opportunity to play different roles is always very intriguing and exciting. I love traveling so going to Turkey to shoot a film was such an amazing experience culturally, and also as an artist. And on Smallville to play a comic book character could be a little nerve wrecking, but it is fun at the same time. There is a lot of research that I can base my character on. Black Canary in smallville is kind of a ‘Bad Ass’ so she is a lot of fun to play. She posses many great qualities: she is sexy, well accomplished, a great detective, an excellent Marshal Artist, and full of confidence.

Was it difficult for you play a ‘Bad Ass’ character such as the Black Canary in Smallville?
No, I can play bad ass characters very well! I don’t find it difficult at all, it is actually fun for me. I tend to play these types of tough characters. My character in Jack Hunter for example pulls the trick on Jack Hunter. But most people who know me in real find it hard to believe. They always react with a “Really”?! 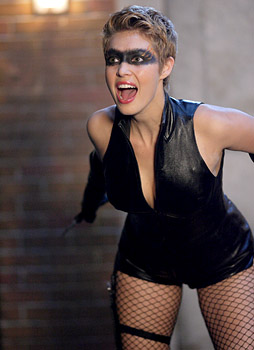 What would be your dream acting role?
I’m open to any role or character, especially the ones that allow me to travel. I love playing strong and powerful women. I also would love to act in a period piece and wear these amazing costumes. This is why I like playing the Black Canary in Smallville, she wears a costume. When I put on a costume I immediately transform to that character.

What’s next for Alaina Huffman?
I’m talking to a couple of producers right now about a movie shooting in South Africa in January 2009. I returned to Smallville in October to shoot another episode for season 8.

What is your number one beauty secret?
I use olive oil on my skin and on my hair. Olive Oil has the perfect level of hydration without being too greasy. I use it on my kids as well. And of course it’s natural.

What is your favorite mascara?
I love the brush in Lancôme Definicils High Definition Mascara, it makes my lashes really long and thick.

What is your favorite lip gloss?
MAC Cosmetics Tinted Lipglass in C-Thru, which is a nude shade.

What’s in Alaina Huffman’s makeup bag at all times?
I would have to say a lip gloss and mascara. Also, an Almay powder which I like to use on the go, especially before an audition or on a hot day in Los Angeles.

Which celebrity do you find most beautiful?
Charlize Theron, Scarlette Johansen, and Natalie Portman are beautiful, and very focused working actresses. They are also very good at escaping the tabloids, and I respect that a lot.

Who would you like to invite to your ultimate dinner party?
Barack Obama and John McCaine.

What is your favorite city in the world?
I love big cities like New York City and Tokyo. I love how New York is a non-stop city and there is always something to do. I also love how you can walk anywhere and not drive all the time. Most of all, I love how it is very culturally diverse. And, I have very fond memories of Tokyo.

It was great to discuss beauty secrets with Alaina make sure to check her out in Smallville on CW.

Alaina Huffman was interviewed by Marta Walsh for www.beautyinterviews.com