Yesterday, Gato for Maybelline New York and Amanda Steele created a look for the woman who encapsulates these three words – optimistic, independent and fearless – for Rebecca Minkoff’s Fall 2016 “Runway to Retail” collection. 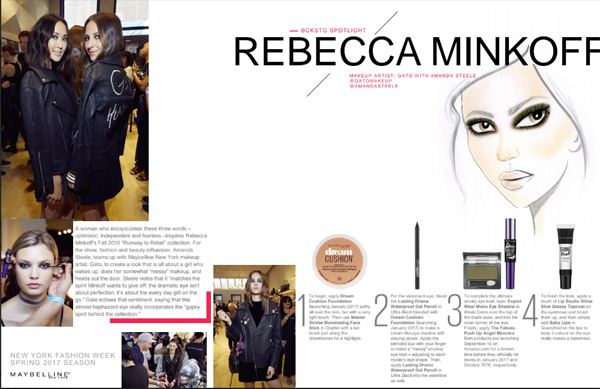 For the show, fashion and beauty influencer, Amanda Steele, teams up with Maybelline New York makeup artist, Gato, to create a look that is all about a girl who wakes up, does her somewhat “messy” makeup, and heads out the door. Steele notes that it “matches the spirit Minkoff wants to give off; the dramatic eye isn’t about perfection, it’s about the every day girl on the go.” Gato echoes that sentiment, saying that this almost haphazard eye really incorporates the “gypsy spirit behind the collection.”