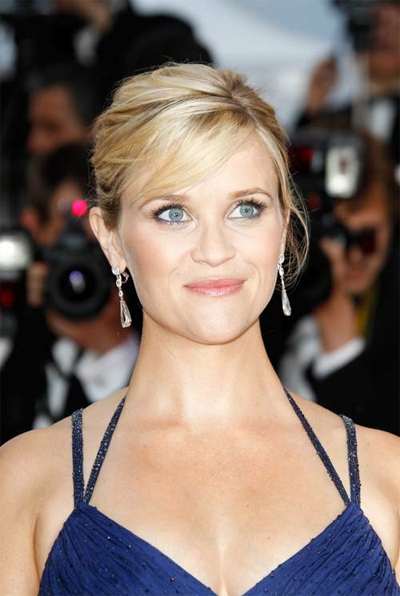 How to get Reese Witherspoon’s hairstyle

“My idea was to create a modern version of the French twist for Reese, a Versace sapphire Goddess!

I started by blowing the hair with a large round brush just to give it simple volume. On the top part of the hair I added Kerastase Volume Active Mousse to have a good hold. The sides and back were just blown straight, and her bangs were softly blown out to the side. I added some Kerastase Ultime Elixir to create texture and separation, and I only used my hands to gather the hair, using the fingers to create separation. Absolutely no combs or brushes, or the hair will lose its depth.

Once the hair was gathered in my hands, I brought it all back and started to twist it into my thumb like as I would to create a classic French twist. But on each pin I added, I was creating a line in the back in order to have the effect of multiple twists – about four total. Once that was done I separated the bangs in soft leaf like shape sections with a deep side part. I finished by using hair spray to create the top separation and polish the sides for shine. The result was soft on the top and sleek sides, two different textures that combine modern and classic”