Sneak peek to the upcoming cover of V MAGAZINE (issue #69), featuring one of the most fascinating personalities of 2011 – Nicki Minaj. Nicki lives up to the hype in “The Discovery Issue,” with Inez Van Lamsweerde & Vinoodh Matadin photographing the birth of a star in her dual-cover (fold-out) issue. V hits newsstands TOMORROW Thursday, January 13th, 2011. 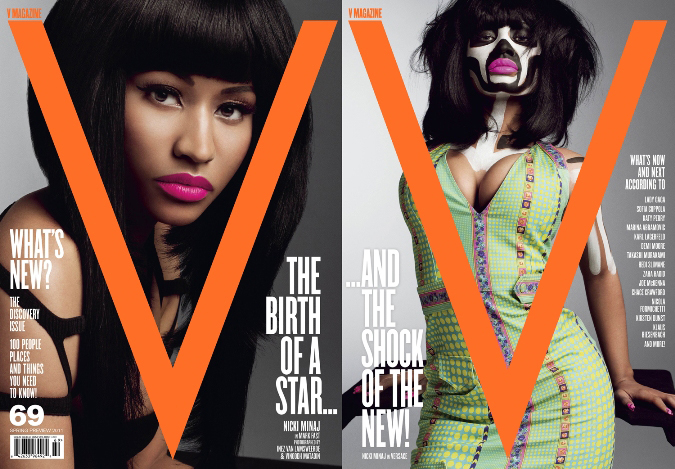 The Rise and Rise of NICKI MINAJ – The tough-talking, one-upping, bodacious, curvaceous Nicki Minaj is taking music to places cooler and more colorful than ever. And in the boys’ club of the 21st-century hip hop, she’s stolen every scene to become the genre’s Barbie-pink princess. Secretly, though, she’s gunning for queen.

“Everything I do has been approved by me personally. My team is mostly made up of guys, but none of them would ever think about telling me what to wear or what to do with my hair. They know that ultimately I’m gonna do what I’m gonna do.” –Nicki Minaj

During a radio interview last summer in support of Kanye West’s new single, “Monster” – a psych-rap posse track featuring Jay-Z, Rick Ross, Nicki Minaj, and indie-folk singer Bon Iver – West declared Minaj to be “the scariest artist in the game right now – she has the most potential to be the number two rapper of all time.” (Number one, in Kanye’s mind, being Eminem.) It was the kind of outré pronouncement we’ve come to expect from West, but nevertheless the sound bite set off serious reverberations in the rap community. Nicki Minaj…the funny face with the Day-Glo wigs, bounteous curves, and multiple personalities? Number two rapper of all time? In-old school hip hop circles the idea could be considered profane.

Now, just in the wake of her debut album, Minaj is deadly serious about not taking it all too seriously. “I’m an entertainer – I like to make people laugh,” she says. “Some will hate it and some will love it, but all will remember it. And that’s what I want: to be remembered. Even if I’m saying something hard-core or controversial, there’s always a touch of humor, and if you don’t like it, it means I’m stirring things up inside of you.” At the same time, there’s a lot going on inside the artist’s own head. “I just always want to do ‘me,’ but ‘me’ changes every day. I would crumble up and die if I had to wake up and be the same person every day. I don’t silence those voices anymore. I just let them speak.” -V