All Posts Tagged With: "glitter"

I just discovered a gorgeous way to get smoky eyes with NARS Single Eye Shadow in Night Breed. The shade: black with silver glitter. The black pigment is pretty strong and you can skip the black eye liner on lower lids. I also use two other eye shadows: MAC Reflects Antique Gold which is part of the MAC Glitter Brilliants collection (your eyes will sparkle like diamonds) and stila kitten eye shadow for highlighting. 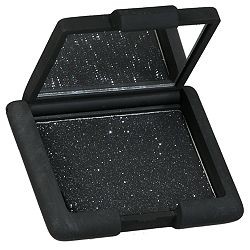 I then add MAC Rapidblack Penultimate Eye Liner (a liquid eye liner) and wing out my eyes for a bit of cat eyes. And finish with MAC Studio Fix Lash mascara. The result: dramatic, sexy eyes! To complete my look I add Chris & Tell lipstick by Lancôme which is THE prefect pink coral shade. I’m addicted to Chis & Tell! Every woman should have one pretty red lipstick and one pretty pink coral lipstick such as Lancome’s version.

Click your Ruby Pumps and come travel with China Glaze down the yellow brick road to meet “The Wizard of Ohh Ahz”! Just in time for the holidays, China Glaze is re-releasing the ever-so popular Wizard of Ohh Ahz collection! Very similar to the original version that was released in 2001, these colors will remind you of exactly why China Glaze glitters are always in the forefront!

Colors in the 6 piece acetate include (from left to right as shown in the photo above):