All Posts Tagged With: "rock star make up"

“The Runaways” Head Make Up Artist, Robin Mathews, Designs the Film’s Signature Smoky Eye Using MAKE UP FOR EVER.

“The Runaways,” starring Kristen Stewart as Joan Jett and Dakota Fanning as Cherie Currie, is the ultimate showcase of the rock star make up that defined the 1970’s. In order to design the eye-catching on-screen looks for the new motion picture, make up department head Robin Mathews chose MAKE UP FOR EVER’s Eye Shadows, Aqua Eyes and Smoky Lash mascara to achieve the smoky eye, rock and roll look of the band. 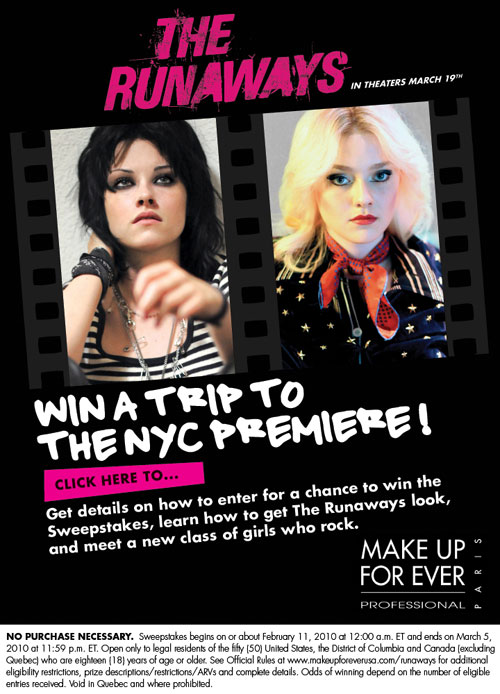 ENTER TO WIN a Trip to The Runaways NYC Premiere: To celebrate the film’s upcoming release, MAKE UP FOR EVER has partnered with “The Runaways” to host a sweepstakes where one lucky winner and a guest will be invited to party like a true rock star at the New York City premiere of the film on March 17th.

For official rules and more information on how to enter, visit http://www.makeupforeverusa.com/runaways/ , and fan them at www.facebook.com/MAKEUPFOREVERUSA  to see their favorite rocker looks.