MAKE UP FOR EVER is opening its first-ever Boutique & Studios within three Sephora stores in Soho, NY, Las Vegas, NV (at the Venetian) and Costa Mesa, CA (at South Coast Plaza). The first store, in Soho, is opening today, and last night, September 30th, 2010, they had a star-studded grand opening party with Audrina Patridge, Olivia Palermo, Kelly Bensimon and Dina Manzo in attendance. 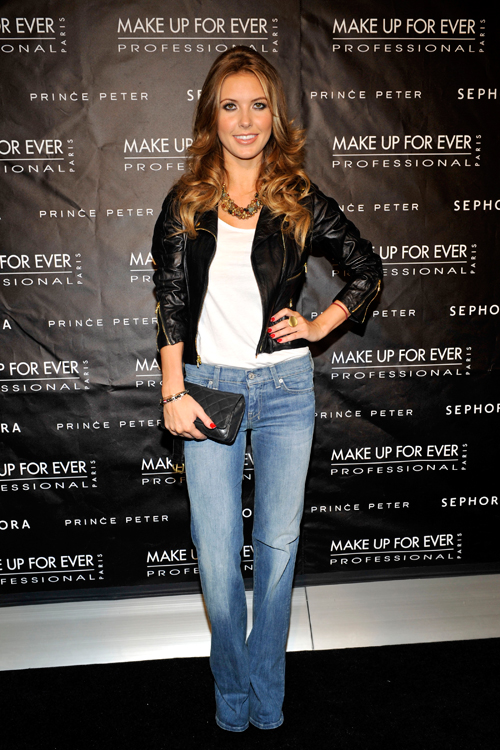 To celebrate MAKE UP FOR EVER’s artistic roots, the brand hosted a “Backstage Onstage” party and fashion show to celebrate the opening of the first-ever MAKE UP FOR EVER Boutique & Studio at Sephora Soho on Thursday, September 30th, 2010. Rock ‘n’ Roll fashion designer, Prince Peter of Prince Peter Collection, lent his designs to be showcased at the event, and his hipster rock looks were matched to beautiful rocker chic make up looks designed by Creator and Artistic Director of MAKE UP FOR EVER, Dany Sanz.

Guests were able experience a runway show from behind the scenes as inside of the new MAKE UP FOR EVER Boutique & Studio, the back of house preparations that lead up to a runway show were on display for attendees to witness before the show. From models getting hair and make up done at lightning speed, to quick outfit changes, to touch ups before stepping onto the runway (which ran the length of the SEPHORA store) guests were right there experience the rush of backstage.

To celebrate the opening of the new MAKE UP FOR EVER Boutique & Studios at Sephora in Soho, NY, Las Vegas, NV and Costa Mesa, CA, the brand will be offering complimentary 20 minute make up tutorials during weekend at each location ($40 value, choose from different services for the eyes, lips and complexion). And, the first 100 clients to take a complimentary lesson will also receive a free Rouge Artist Lipstick in #43, fall’s perfect shade of red.