Interview with Cristina Bartolucci of DuWop

Check out an exclusive and cool interview by Marta Walsh of http://beautyinterviews.com/ with Cristina Barolucci the talented founder of DuWop Cosmetics. 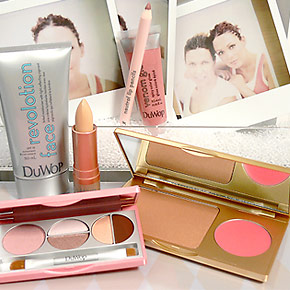 How was the idea for DuWop makeup line born?
DuWop’s other co-founder, Laura DeLuisa, and I were working together backstage on Hollywood sets (Laura worked on hair and I did makeup). One major problem I constantly came across was dealing with the actors’ and actresses’ puffy eyes. Trying to solve this problem using gauze soaked  in ice water created a mess backstage, so we began mixing up a cooling gel concoction with essential oils that became our first product, I gels.

Our next idea was for our infamous lip plumper that revolutionized the beauty industry – Lip Venom. Working on the set of the hit NBC show “Felicity,” I noticed that after love scenes, my actresses would come to me for touch-ups and have these beautiful flushed, plump lips. We wanted to create a product that mimicked the same effect as kissing, so we went to work mixing up ingredients that would increase the circulation to the lips, like kissing, to plump them up. We tried cayenne pepper, crushed mustard seeds, and anything else we had in the cupboard. Once we had a formula that worked, we would bring it to set and test it on Jennifer Garner and Keri Russell, who starred in the show, and get their feedback. After several tries, the formula for Lip Venom was created.

After the success of I Gels and Lip Venom, we saw that we really had something going and decided to take tricks of the trade and start our own
company.

What is DuWop’s philosophy?
“We are creating what’s missing from your makeup bag.” At DuWop we
believe that you cannot do everything brilliantly. We strive to create innovative color cosmetics and tools that can be used with DuWop makeup or any other line. We are sensitive to the fact that beauty shoppers no longer stick with just one brand. They cherry pick the best of everything and we are working on making cherries..

Which celebrities are fans of DuWop?
We love that Lindsay Lohan seems to be our unofficial spokeswoman – she’s a huge fan of Lip Venom and always attributes her gorgeous pout to our lip plumper. Corinne Bailey Rae uses our I gels to help her relax before any performances. We also get so many requests for Revolotion around awards season. Makeup artists have constantly mentioned how their clients can’t live without our little tinted body moisturizer in the blue bottle.

To read the full interview with Cristina Bartolucci of DuWop Cosmetics here: http://beautyinterviews.com/interviews/duwop/