Kenneth Cole New York announces the launch of its new touch screen watch series, the first of its kind in the fashion-forward watch category. This innovative feature bridges fashion and technology, allowing the consumer to interact with time with the touch of a finger. 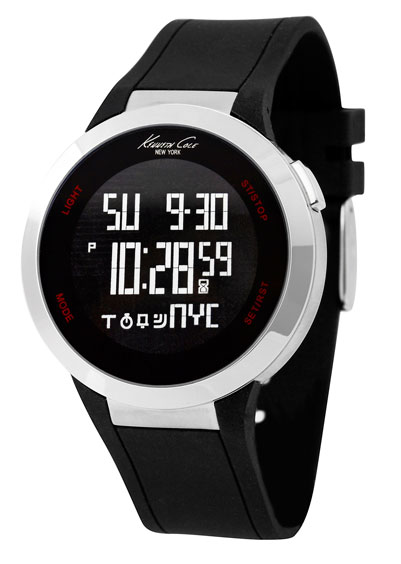 The Kenneth Cole New York touch screen watches aim to inspire a new generation of consumers already passionate about touch screen technology available on smartphones and music players. The collection mixes traditional and fashion-tech features in a modern sleek design and maintains the brands signature, classic look with a stainless steel round case paired with a silicon strap. The watch functionality includes 32-City world time and an alarm, stopwatch and light up screen. Both the aesthetic and ease of use makes the watches practical for everyday use and for every occasion; the savvy college grad, the ambitious professional or the sporty on-the-go dad.

The Kenneth Cole New York touch screen collection embraces another cutting-edge step with its new ad campaign, “A Defining Moment in Time”. The campaign features a high energy video that creates a connection for the consumer by illustrating defining moments in life in conjunction with this defining moment in technology and fashion. The video will be available for consumers to view through the new media technology, QR Codes. The QR Code uses a bar code system in which the consumer can snap a picture of the bar code with their smartphone and the video will upload and play on their own device. This technology will be featured in a special 4 page insert in the June/July 2010 issue of Details Magazine, as well as at point of sale in Kenneth Cole, Macy’s and Dillards store locations nationwide.

Kenneth Cole New York touch screen watches with digi-touch technology retail from $125 to $175 and can be found at Kenneth Cole retail stores, department stores including Macy’s, Dillard’s, and Nordstrom and online at kennethcole.com.

Kenneth Cole Productions, Inc. designs, sources and markets a broad range of footwear, handbags, apparel and accessories under the brand names Kenneth Cole New York, Kenneth Cole Reaction, Unlisted and Le Tigre, as well as footwear under the proprietary trademark Gentle Souls. The Company has also granted a wide variety of third party licenses for the production of men’s, women’s and children’s apparel as well as fragrances, watches, jewelry, eyewear and several other accessory categories. The Company’s products are distributed through department stores, better specialty stores, company-owned retail stores and its e-commerce website. Further information can be found at http://www.kennethcole.com.