Christina Hendricks At The 2010 Emmy Awards

Christina Hendricks’ Makeup: Christina Hendricks, Supporting Actress nominee for her role in “Mad Men,” was ethereal and stunning at tonight’s 2010 Emmy Awards. Clad in a lilac Zac Posen gown, with her signature red hair flowing, Christina’s makeup evoked Mia Farrow’s iconic character from “The Great Gatsby.” Thanks to Lancôme and Vanessa Scali Talking Makeup has the scoop on how Christina Hendricks got her makeup look! The ‘Bling’ BTW: Champagne Diamond Pave Dome Earrings. 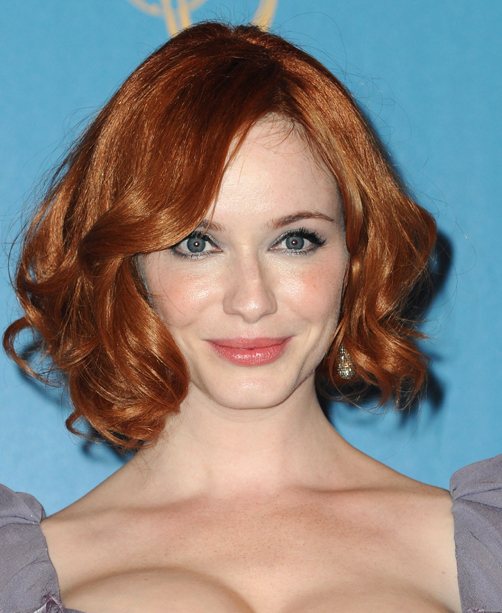 How To Get Christina Hendricks’s Makeup Look: Makeup Tutorial by Vanessa Scali for Lancôme

Vanessa prepped the skin with Lancôme’s La Base Pro. To perfect Christina’s already luminous skin, Vanessa used Lancôme’s new Teint Miracle Lit-From-Within Makeup. “It has an amazing transparent quality that leaves the skin looking flawless and luminous without being shiny,” said Vanessa. “I applied it with a brush and then blended with my fingers.” Blending with her fingers heated up the foundation a bit, allowing for a seamless finish. Vanessa followed with Effacernes Concealer under the eyes, her “all time favorite concealer.”

For a fresh pop of color I used Lancôme’s Blush Subtil Shimmer in Pink Pool on the apples of her cheeks. Dabs of Giorgio Armani Beauty’s Fluid Sheer #2 highlighted Christina’s cheekbones.

The eye shadow was mix of YSL’s Ombre Solo Eyeshadow in Cashmere Brown and Midnight Black. “I applied these all over her lid, under the bottom lashes and blended it out past her natural lash line to softly elongate the eye,” reported Vanessa.

To define and elongate the lash line, Vanessa lined the eyes with Lancôme’s Le Crayon Khôl in Black. “I used a touch of liner under her bottom lashes but smudged it for a softer look,” said Vanessa. For added depth, Vanessa used Artliner Precision Point Eyeliner in Noir at the very base of Christina’s lashes.

Several generous coats of Lancôme Définicils Waterproof Mascara in Black were used on the top and bottom lashes.

Christina’s lips were a mix of Lancôme lip colors for an effect that Vanessa described as “red with a little dash of pink.” A sheer coat of Color Design Matte Lipstick in Corset was topped by La Laque Fever Lipshine in Cyber Coral.