Makeup Artist Beau Nelson created the makeup look for Kristen Stewart At The 2012 Cannes Film Festival. “For Kristen’s red hot Reem Acra dress, I wanted to do something special and very modern Hollywood.” 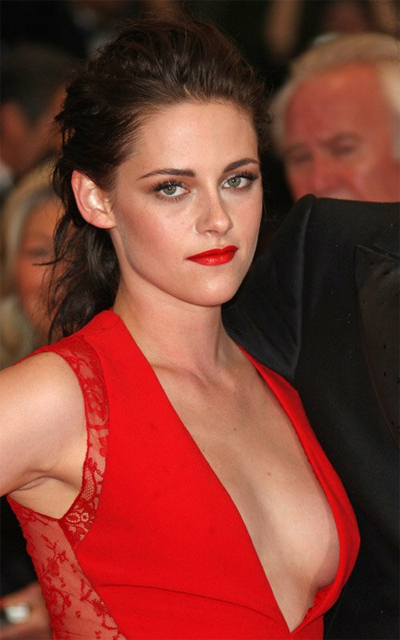 Kristen Stewart At The 2012 Cannes Film Festival. Do you love?

How to get Kristen Stewart’s makeup look

“I created a flawless base with Illamasqua Skin Base Foundation, Maybelline Instant Age Rewind Concealer, and Laura Mercier Secret Brightening Powder. I used NARS Eye Shadow in Blondie to accentuate her eye shape, and then used CHANEL Illusion D’Ombré in Fantasme, a clear glitter shade so fine it almost looks wet, over the shadow for a shine effect. I made the lash line very black by using L’Oreal Voluminous Mascara in Carbon Black and individual lashes. Cheeks were gently contoured with NARS Blush in Amour. Lips were lined and filled in with NARS Lip Liner in Jungle Red and then topped with NARS Semi Matte Lipstick in Heat Wave.

Hairstylist Giannandrea created Kristen Stewart’s hairstyle: “The inspiration for Kristen’s up do hair style for the premiere of Cosmopolis was modern romanticism.”

How to get Kristen Stewart’s hairstyle

“I started with wet hair and then applied a lot of Kerastase Volume Mousse to the whole head. I blow dried the hair in all directions without a brush – just hot air. I then brushed the hair with a Mason Pearson Brush in order to gain a lot of volume. I then used a 1 inch curling iron and curled the whole head loosely. I used a small amount of Supremo Magic Move Soft Cream to give it a rich texture. The hair was twisted loosely and pinned in place in the back of the head, while the front part was given a bit of top volume, and the side were kept soft and loose to maintain the right proportion.

This style needs to be loosely messy in the back and not tight. The ends of the hair should form a cascading effect in the back, twisting straight pins into the hair to create separation. Spray with L’Oreal Elnett Hairspray to finish.”