On August 11th, 2010, Mayor Bloomberg along with Anna Wintour, retailers, and many CFDA designers met down at City Hall for a press conference to kick-off Fashion’s Night Out this year. 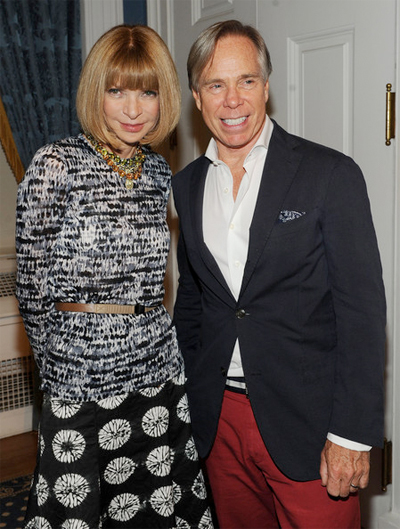 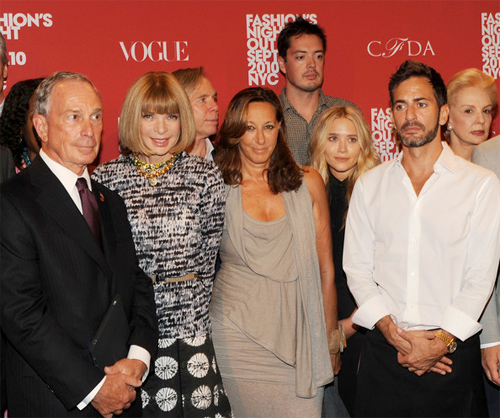 Nearly 1,000 Participants Across the City Already a Part of this Year’s Event, Including Largest Public Fashion Show in New York City History. 175,000 Jobs in City’s $10 Billion Retail and Fashion Industries

Mayor Michael R. Bloomberg, NYC & Company CEO George Fertitta, Vogue Editor-in-Chief Anna Wintour and Council of Fashion Designers of America (CFDA) Executive Director Steven Kolb today detailed Fashion’s Night Out 2010, which will include the largest public fashion show in New York City history – Fashion’s Night Out: The Show. Fashion’s Night Out, which was first introduced last year, is a citywide event to support retail and fashion in New York City. Participating retail stores across the five boroughs will stay open until 11:00 PM on Friday, September 10th, 2010, and offer an array of in-store celebrations and promotions. Nearly 1000 participants, including retailers, designers, and fashion and beauty brands have already signed on to participate in the event. The new public fashion show will take place on September 7th at Lincoln Center and tickets will go on sale to the public on Thursday, August 19th through the Lincoln Center Box Office. The show will feature more than 150 top models and trends for fall as determined by Vogue and the show will seat more than 1,500 spectators, with tickets starting at $25. Proceeds from the fashion show’s ticket sales will benefit the NYC AIDS Fund. The Mayor also was joined by Saks, Inc. CEO Steve Sadove, designer Marc Jacobs and leading members of the fashion and retail community.

“Fashion and retail is part of the very fabric of New York City – supporting 175,000 jobs and pumping $10 billion into our economy annually,” said Mayor Bloomberg. “We are going to continue to help support, develop and expand these sectors with programs like Fashion’s Night Out, our fashion incubator and the CFDA/Vogue Fashion Fund. With a growing number of locations participating in Fashion’s Night Out and the largest public fashion show in city history, we are providing consumers with more opportunities to see all the city’s retailers and designers have to offer.”

“Millions from around the world visit New York City to be at the epicenter for fashion and design,” said NYC & Company CEO George Fertitta. “Fashion’s Night Out is a global showcase for the city’s outstanding talent, attracting visitors and supporting the local businesses that work so hard to ensure that New York City remains the world’s fashion capital. We are also excited to expand this year’s program to include this one-of-a-kind fashion show that will make Fashion’s Night Out even more accessible to visitors and residents across the five boroughs.”

“We are very excited to add the fashion show this year so that people will have the opportunity to see the wonderful clothes that will be available to them on Fashion’s Night Out,” said Vogue Editor-in-Chief Anna Wintour. “We’ve focused the show on the trends we thought were most important, so that no matter what their style or budget shoppers will have a source of inspiration.”

“This is the first fashion show of its kind to bring the excitement of a live fashion show in an amazing outdoor setting directly to the general public,” said CFDA Executive Director Steven Kolb. “Guests will get a rare, first-hand glimpse of in-season clothes from the most creative designers, including many CFDA members and the top in American talent.”

According to NYC & Company, the city’s marketing, tourism and partnership organization, half of the visitors to New York City cite shopping as their primary activity during their stay. With nearly 1,000 participants currently registered to host an array of in-store celebrations across the five boroughs, Fashion’s Night Out has already surpassed last year’s inaugural event and nearly $500,000 has been raised for the NYC AIDS Fund through exclusive Fashion’s Night Out merchandise sales.

Starting on August 16th, a listing of Fashion’s Night Out events to date – including designer and celebrity appearances, special products, performances and fashion shows with more expected to appear as the event nears – can be viewed by going to www.nyc.gov. In addition, NYC & Company has worked with hotels around the city to create more than 40 individual hotel packages for the month of September, including packages at 6 Thompson, Fashion 26, Hudson New York, Paramount Hotel New York and the Mandarin Oriental. In an effort to drive visitation and increase consumer participation, these hotels will offer exclusive deals for travelers who want to experience Fashion’s Night Out. A full list of hotels and packages is available on www.nyc.gov.

On Tuesday, September 14th, CBS will also air an hour-long special on the making of Fashion’s Night Out. The piece will feature designers, editors and retailers as they prepare for the second year of Fashion’s Night Out, as well as other industry professionals – from salespeople to design staff – who work and contribute to the city’s retail and fashion sectors.

Last year, Mayor Bloomberg and the CFDA launched the CFDA Fashion Incubator, which is designed to grow and sustain the next generation of fashion designers in New York City by providing access to low-cost studio space and support services. New York City’s Economic Development Corporation provided a three-year, $200,000 grant to establish the incubator, which is an approximately 10,000-square-foot space that accommodates up to twelve designers. Similarly, the CFDA/Vogue Fashion Fund, which Mayor Bloomberg helped launch in 2003, continues to provide financial support and business mentorship for emerging designers and this year’s $200,000 top prize and two $50,000 runner-ups will be announced on November 15th. Designer Prabal Gurung, a participant in the CFDA Fashion Incubator and a past finalist for the CFDA/Fashion Fund award, also joined the Mayor at the announcement.

Fashion’s Night Out is supported through the generous contributions of American Express, Maybelline New York, Payless ShoeSource, QVC and Volkswagen.