And for the first time, the perspective of a man – Brad Pitt – on the most feminine fragrance of all time: CHANEL N°5 For many, CHANEL N°5 is an icon. For others, the best-selling fragrance evokes the eternal woman. For Joe Wright, the director of the new advertising campaign for N°5, the scent is “a phenomenon that continues to invent and reinvent itself.” Case in point: the unexpected decision to sign Brad Pitt as the face of N°5. The actor follows in the footsteps of Coco Chanel, Marilyn Monroe, Catherine Deneuve, Lauren Hutton, Nicole Kidman and Audrey Tautou, and represents a first in the world of women’s fragrance, just as N°5 marked a first in 1921 with its radical and intoxicating mix of 80 ingredients. 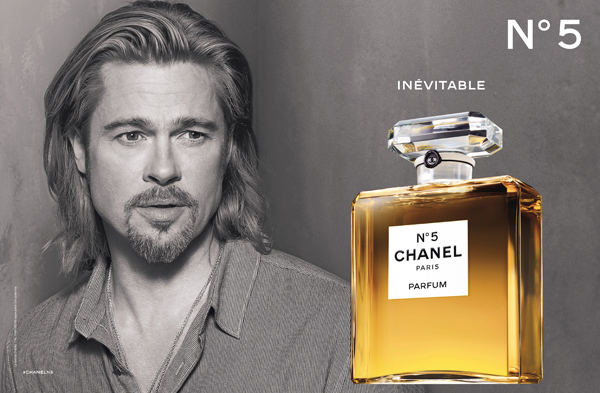 SEE THE Brad Pitt Behind The Scenes Photos with CHANEL

A legendary bottle, its very own signature. An abstract fragrance with visionary composition that breaks with the times. A communications campaign that is endlessly renewed, ever bolder, forever anchored in the dream. One name, one number. 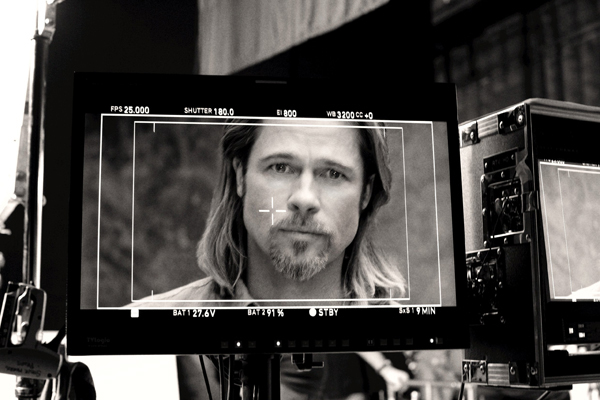 Brad Pitt BTS (Behind The Scenes) with CHANEL

“What’s important to remember about CHANEL N°5 is how revolutionary this fragrance is; when it was introduced, it broke all the rules,” says Pitt. “N°5 has always been the most iconic women’s fragrance. That’s what I see being the appeal of this campaign; it goes beyond the abstract of emotion or beauty to evoke what is timeless: a woman’s spirit.”

Blessed with legendary talent, fame and looks, no actor compares to Brad Pitt. Of course, the same could be said of N°5. Created by Ernest Beaux, the perfumer of the last Russian Czar and CHANEL’s first Master Perfumer, the fragrance is beloved around the world. The campaign views the fragrance through the eyes of a man and fits in with the “revolutionary” reputation of N°5, which broke down barriers, as well as Coco Chanel, a woman who dared to be different. For the shoot, CHANEL hired Film Director Joe Wright, who is known for his movies Pride and Prejudice, Atonement and the upcoming Anna Karenina, plus his two Coco Mademoiselle commercials starring Keira Knightley. Wright was commissioned to direct several commercial films for N°5, which capture the memories, thoughts and dreams of a man being seduced by a fragrance. “Each resembles a short poem,” the 40-year-old director says. 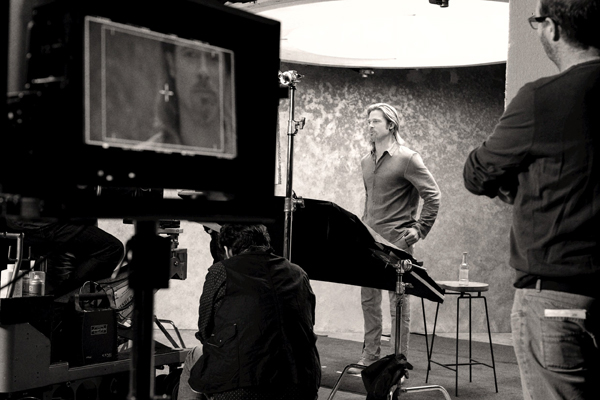 “It was a real treat that I will never forget,” says Wright. “My favorite moment was the wide shot getting closer and closer and ending up on Brad. He’s a beautiful human being and a proper actor who knows how to deliver lines. It’s always lovely when you meet someone who you admire and they exceed your expectations.” The film is an ode to the scent. Filmed in black and white on a stark background, Pitt speaks every line directly into the camera. “I don’t see why perfume commercials shouldn’t be moving,” offers Wright. The emotion comes from Pitt’s voice, which Wright describes as being “beautiful” and “a great American voice.” Adds Wright: “There are lots of handsome men around but it’s his soul that comes out in his voice. It gets under your skin.” 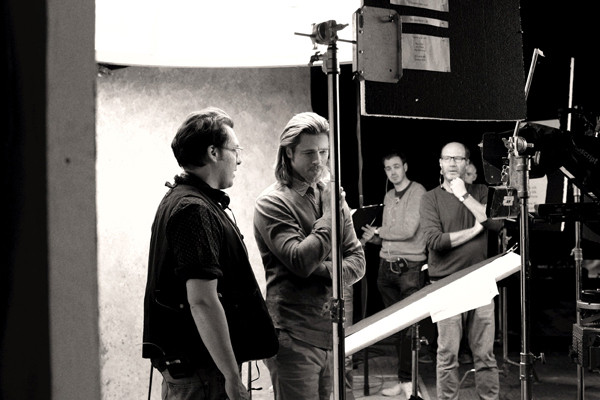 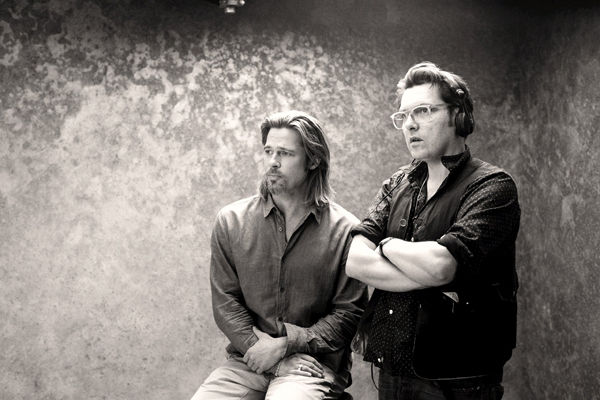 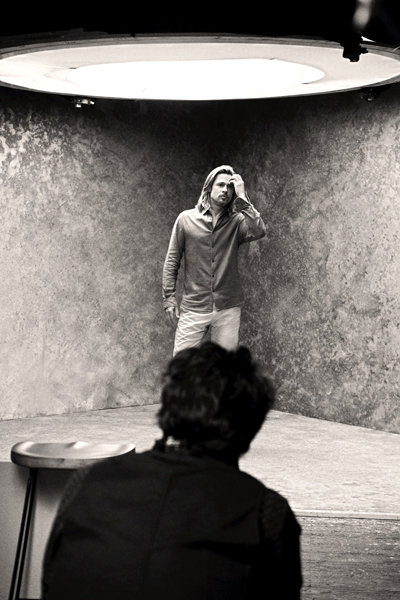 The intimate approach – the antithesis of today’s dense, complicated commercial narratives – was inspired by the classic N°5 advertisements from the late sixties, featuring Catherine Deneuve. “I really admired the simplicity of the Deneuve ads,” reveals Wright. “When you have Deneuve or Pitt, why would you need to decorate that? It would be like gilding the lily. I wanted to create something incredibly simple and strong that really focused on the performance.” In order to prepare Pitt, Wright encouraged the actor to think about N°5 in a personal way. “We never discussed it in intellectual terms,” Wright says. “We discussed what N°5 meant to us. I wanted to ground it in a real, emotional context.” 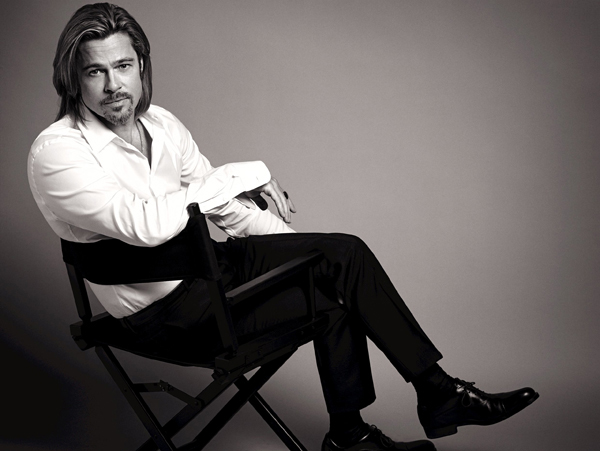 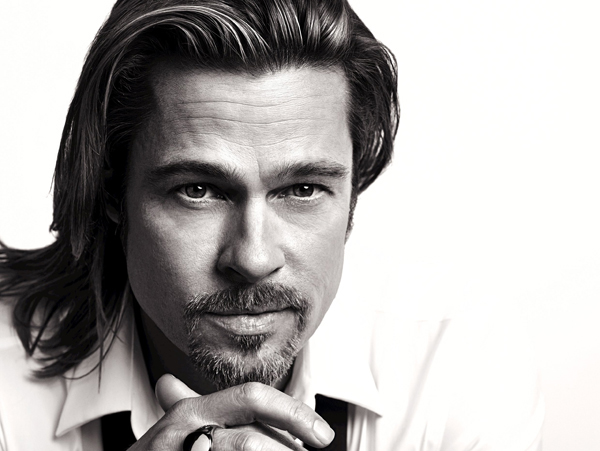 For the campaign, Wright’s main goal was to capture the global element of N°5 and illuminate how it stands as a pervasive force throughout the world. “I found it touching that women in every country have had a relationship with N°5, and I wanted to do something about that,” he says.

Wright’s sensual use of the camera led to his being offered the N°5 campaign. “It was an amazing privilege and honor,” he says. “It is such an iconic perfume. So many perfumes are easy to recognize and associate with a time but you can’t do that with N°5.” No doubt, Wright is referring to how N°5 is accessible but also symbolizes dreams, luxury and seduction. “It does not feel like a perfume that is designed to attract a male, yet it does,” Wright says. “It feels more than that and kind of beyond sex.”

Wright’s CHANEL commercials provide the opportunity to make “a small film of art.” “They talk about a world that expresses love and I love thinking about love,” he admits. The film debuts online October 14 at 6:01pm Eastern Standard Time and on national television on October 21. The print campaign shot by Steven Klein debuts in November magazine issues. 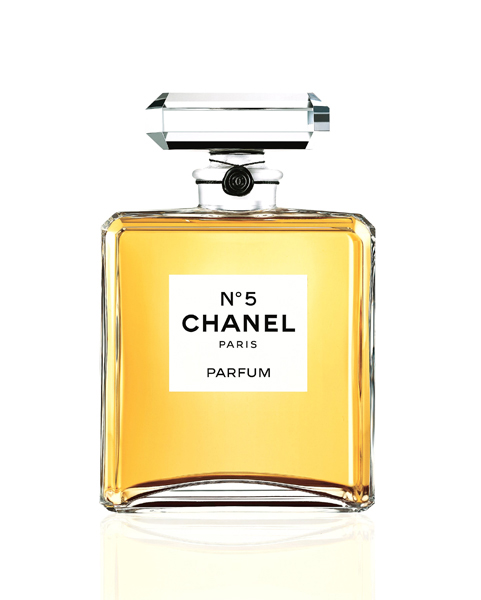 CHANEL N˚5, the world’s most famous fragrance, made its debut in 1921. Coco Chanel asked the great perfumer, Ernest Beaux, to create a fragrance that reflected her very modern fashion philosophy. N˚5 was her lucky number and it was the fifth submission presented to Mademoiselle Chanel on the fifth day of the fifth month of the year, thus a legend was born with the name CHANEL N˚5.