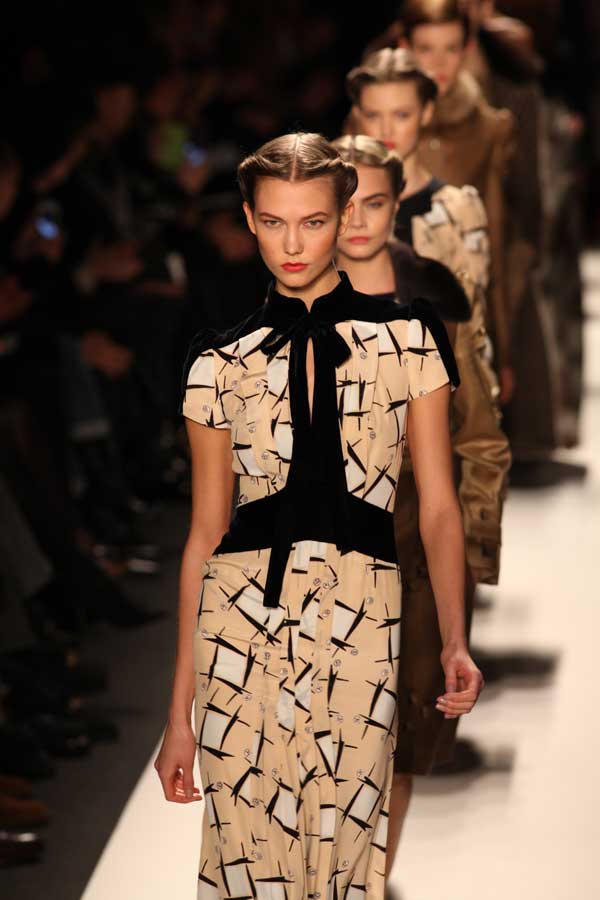 “For the Fall 2013 collection, Carolina Herrera takes her inspiration from music. Collaborating with London-based composer Tom Hodge and producer Javier Peral, Carolina Herrera commissioned a musical score inspired by Beethoven’s Kreutzer Violin Sonata. The score, titled “Capriccio for Carolina,” possesses all the romanticism, drama and fantasy of Beethoven but done in a modern way. If the music is a soundtrack to this season, the collection embodies a strong heroine. Precisions in the cuts define the silhouettes. A hint of the 40’s is present in the sleeve shape, the tiny waists and the flirty movement of the skirts. The soft color palette of rose quartz, sandstone and tiger-eye crescendo playing to the music’s effect to rich hues of gemstone colors in ruby, sapphire, and emerald green.” 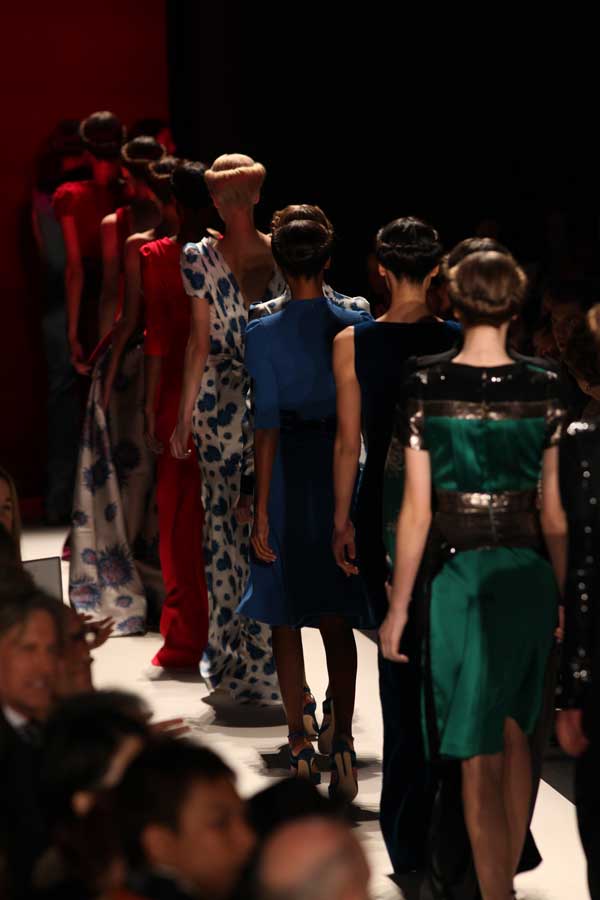 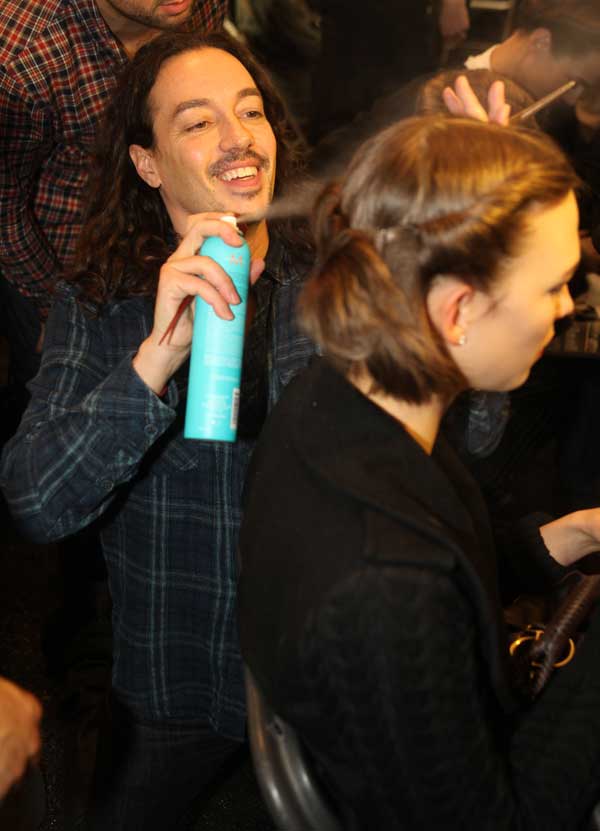 How The Look Was Created 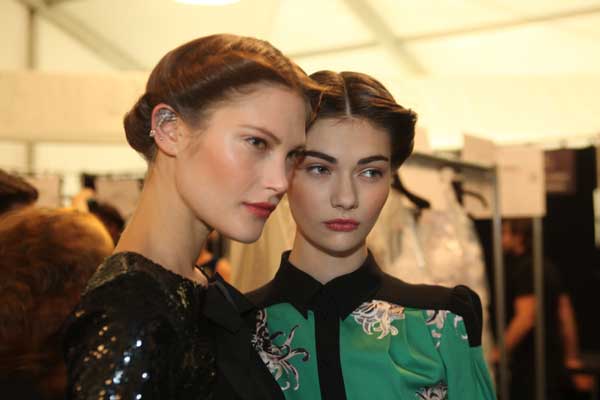 “I started by spraying new Moroccanoil Heat Styling Protection throughout the hair to prepare for blow-drying and for a soft, natural-looking hold. For models with fine hair, I also worked in Moroccanoil Volumizing Mousse, and then blow-dried hair straight. 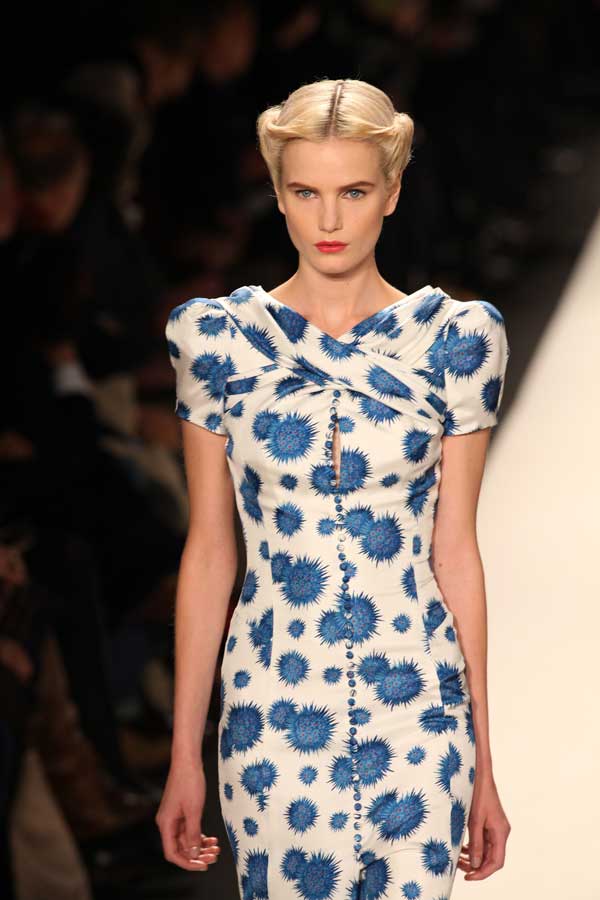 “Next, I applied Moroccanoil Hydrating Styling Cream to create a beautiful modern sheen, for styling control, and to help make the look sleek and perfect. I applied a bit more at the roots and top of hair since we were creating the style so close to the head.

“I started by parting the hair down the middle to create two sections, and a third, which started behind the ear, up to the crown, and down to behind the ear on the other side.

After lightly backcombing (about 2 inches from the root) for models with fine hair, I took each front part, rolled it very tightly, and pinned the roll at its seam as well as behind the ear.

“I then took strands remaining at the end of the rolls, twisted and crisscrossed them at ear level and pinned to serve as a focal point to secure hair that would be rolled up from the remaining back section. Finally, I raised the back sections slightly above the nape, rolled them tight but a bit wider than in the front, then tucked them in and pinned. 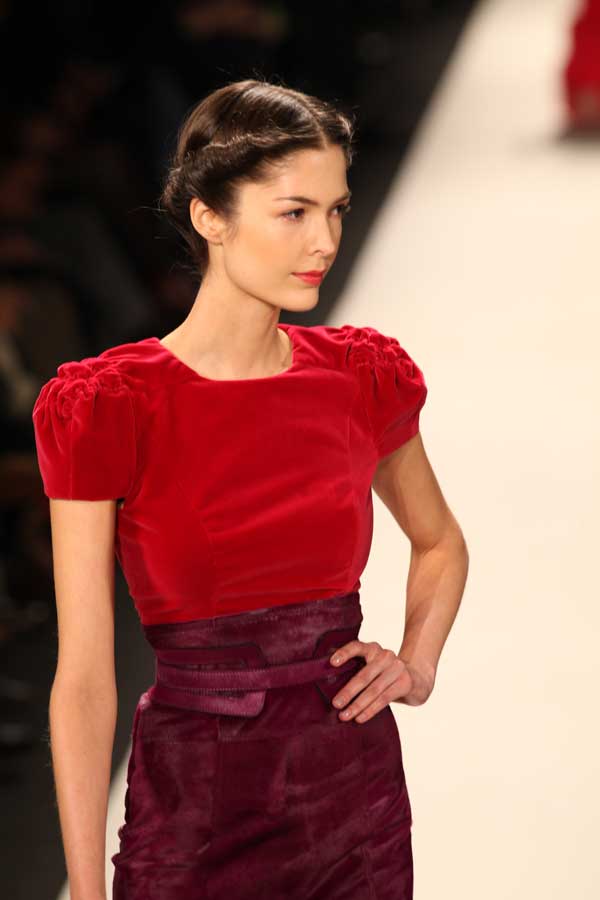 “ I used a bit more Moroccanoil Hydrating Styling Cream on my fingers and applied it to any flyway’s or loose strands, so that the hair stayed sleek and perfect.

“To finish I gave the hair a very light misting of Moroccanoil Glimmer Shine Spray for extra luminosity and shine.”