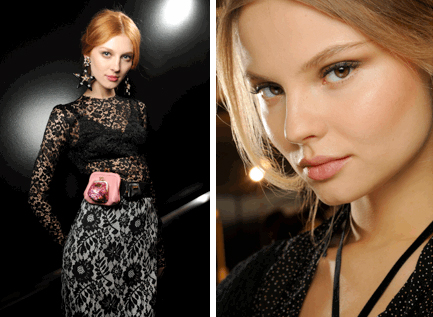 At the Dolce&Gabbana Autumn/Winter 2011 Ready to Wear show in Milan, Dolce&Gabbana make up artist Pat McGrath evoked contrasts between masculine definition and glowing, feminine beauty by creating two very different looks on the models. The sense of contradiction was evident in the contrast between light, minimal taupe tones and deep berry stain applied to models’ lips.

Backstage, Pat McGrath began by applying The Foundation to all models’ faces to create satin finished skin that was matte along the t-zone with dewy touches on the cheeks and temples. Full coverage and impeccable luminosity was achieved by blending Perfect Finish Concealer underneath the eyes.

Pat then created a light, feminine look on half the models for a look that she described as “ultra feminine, ultra gorgeous – very sensual, rosy, pretty, glowing!”

She began with the eyes, using the darkest taupe shadow from The Smooth Eye Colour Quad in Femme Fatale over a layer of moisturizer. Applying the taupe wash all around the eye, she created an almondine shape, intensifying the pigment in the crease of the lid. A sweep of the same taupe colour was also applied beneath the lower lash line. She then complemented this using the lightest, shimmering shade from the Quad and brushing it over the centre of the lid. The eye was then given greater definition using The Eyeliner Crayon Intense in Black along the natural line of the top lid with a light sweep of The Eyeliner Crayon Intense in Nude along the waterline. Pat then applied a small amount of The Eyeliner Crayon Intense in Shimmer to corner of the eye. Several coats of The Mascara Volumized Lashes added definition and volume to models’ lashes.

Moving onwards to the cheeks, Pat then used a large blush brush to apply The Blush Luminous Cheek Colour in Warm in a circular motion along the contour, cheekbone, and up onto the temple for a flushed, youthful glow. This was delicately offset with a dusting of The Illuminator in Eva.

For the lips, a gorgeous finishing touch was achieved by creating a warm berry stain. To craft a perfectly balanced hue, Pat mixed The Classic Cream Lipstick in both Glam and Dramatic, applying the mixture to the lips sparingly by pressing in with her fingers.

The look was then finished with vibrant, feminine hues on the nails. The Intense Nail Lacquer in Cosmopolitan, Shocking and Fire were used for maximum effect. 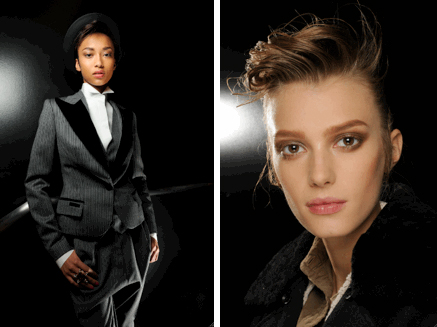 Pat then created a masculine look on the remaining models with a look she defined as “beautiful and strong. Masculine but still very pretty!”

A warm toned stain of the same taupe eyeshadow from The Smooth Eye Colour Quad in Femme Fatale was squared all around the eye and mixed with a touch of moisturizer for maximum intensity of pigment. Lashes were then curled for subtle definition and brows were kept strong, expertly groomed and filled, in the same shade as the hair.

Pat then created a more sculpted look on the masculine models’ cheeks, accentuating bone structure with The Luminous Cheek Colour in Tan along the contour of the cheeks. She then finished the look with a sweep of The Illuminator in Eva along the brow bone and cheeks, then added a dash of lip balm to an otherwise natural lip.