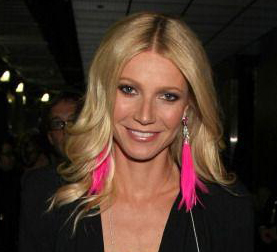 “I wanted sexy rock chic for Gwyneth! After applying a light layer of CHANEL Hydramax + Active Moisture Cream and waiting about ten minutes for it to absorb, I applied CHANEL Vitalumiere Aqua Ultra-Light Skin Perfecting Makeup in BR20 (available in March 2011).

For the eyes I chose CHANEL Soft Touch Eyeshadow in Cinnamon, smoking the eyes, and also on the lower lash line. And of course tons and tons of CHANEL Inimitable Mascara in Noir! For concealer I used CHANEL Lift Lumière Smoothing and Rejuvinating Concealer in Rose Lumière in a half moon shape blending almost to the hair line and into the temples next to eye brow. I used round motions to create a soft sexy look. For her cheeks, I used the cream cheek colour in the CHANEL Multi-Use Makeup Palette in Paris- L.A, applying with a tapping motion using my fingers. Finally, her lips CHANEL Ultra-Wear Lip Colour in Rose Agate.”