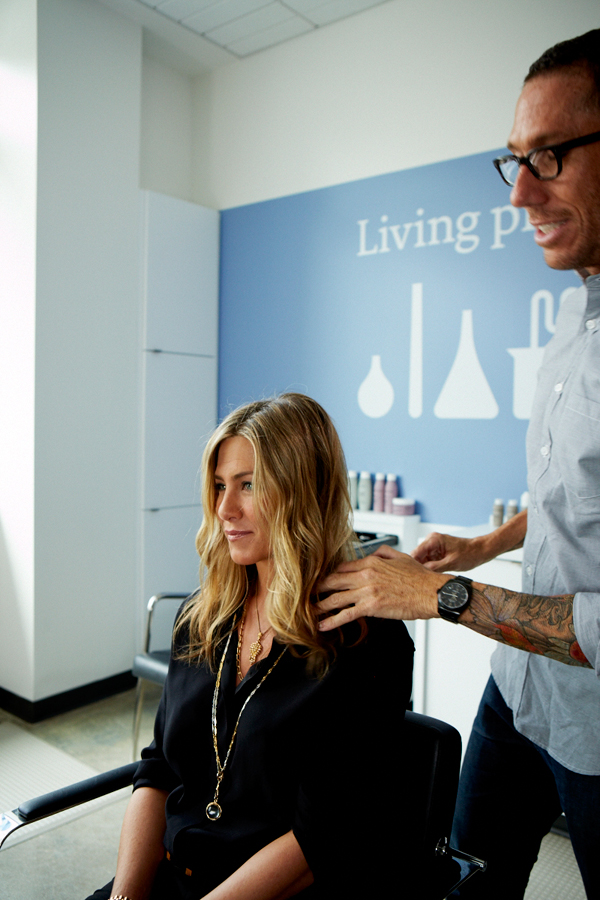 Cambridge, MA – October 11, 2012 – Living Proof announced today it is joining creative forces with Jennifer Aniston as she becomes a co-owner and hair care spokesperson in the ground-breaking company. Living Proof was founded by Dr. Robert Langer, Institute Professor of MIT and by Jon Flint and Amir Nashat of Polaris Venture Partners, a leading venture capital firm that supports the translation of scientific discoveries into meaningful products. Living Proof has distinguished itself by attracting world class scientists and utilizing advanced scientific technologies that originated from MIT to solve women’s toughest beauty problems.

“Jennifer embodies everything we stand for – a unique combination of beauty and brains. She not only has the most fabulous hair but is an amazing creative talent, and has shown she is a savvy businesswoman with a serious interest in developing small, innovative companies,” says Living Proof CEO, Jill Beraud. “We love how personally vested she becomes in her business ventures and are thrilled she is willing to put that passion into our hair care business.”

Aniston explains her decision to partner with Living Proof: “What caught my attention about Living Proof is the company’s unique approach to hair care — using scientific technologies to offer women actual proof in a bottle rather than hoping for results. I’ve tried so many hair care products,” says Aniston. “Over the years, my hair has been subjected to everything…blow dryers, flatirons, curling irons, color, extensions, you name it. My hair has taken a serious beating. After using these products, I felt like I finally discovered a solution that works every day. I could not be more excited to share Living Proof with the world.”

Under the partnership, Aniston will join an illustrious team organized by Jon Flint, Co-founder and Chairman of Living Proof and Co-founder and General Partner, Polaris Venture Partners, including:

· Co-Founder Robert Langer, PhD. One of the nation’s most accomplished scientists, the largest biotech patent holder in the world, and one of only 14 Institute Professors at MIT

· Colin Gardner, PhD. Living Proof Chief Science Officer, former head of Pharmaceutical R&D at Merck and CSO at TransForm Pharmaceuticals Inc., who conducted his post-doctoral work at Harvard and MIT where he collaborated with Dr. Langer

· Ward Stegerhoek. Founding hair stylist and long-time runway and editorial stylist who is known for his work with Vogue, Allure, Jean-Paul Gaultier and Donna Karan

· Jill Beraud. Living Proof CEO and formerly President Starbucks/Lipton Joint Ventures at Pepsico and, prior to that, global CMO for both Pepsico and Victoria’s Secret

“The science taking place at Living Proof is special because, instead of following the traditional formula within the beauty industry, Jon Flint and I turned to a model we knew worked well for driving innovation — the biotech industry,” explains Dr. Robert Langer. “The working process is unique too. I’ve always believed that if you can find the root cause of the problem, you can solve it. We are also bringing the most modern and advanced technologies such as novel material designs and high throughput technologies to bear on the problems we are trying to solve and we have already received a number of patents for what we have done.”

In just five short years, Living Proof has definitely found a winning formula: one where beauty meets brilliant science. Living Proof has garnered over 34 industry awards for its hair care products. The company is a two-time winner of the coveted Allure Best Beauty Breakthrough Award and recently picked up two more Allure awards in 2012 for frizz and Restore hair products. It has also won a prestigious Edison Award — twice. Named after Thomas Edison, The Edison Awards focus on the innovators as much as the innovations and honor excellence in new product development, marketing, design and innovation.

Last month, Living Proof introduced its latest brainchild, Prime Style Extender, which is set to create an entirely new category in hair care. In typical Living Proof fashion, the scientists didn’t just focus on how to ‘freeze’ a hair style in place, instead, the company concentrated on what causes hair styles to fail. Prime Style Extender not only extends the life of a hair style two times longer, but is also proven to change women’s hair care habits as they touch up less and wash their hair less frequently.