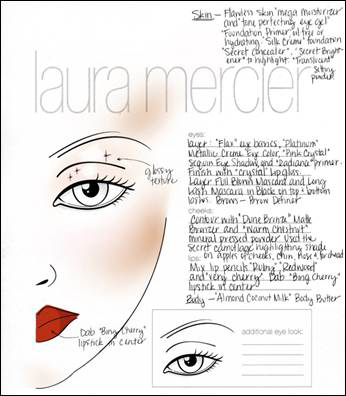 INSPIRATION: The makeup look is a modern take on the glamorous 1970s, inspired by Jerry Hall and the lyrics from the Rolling Stones song about her, “She’s a Rainbow.”

“Have you seen her all in gold

She shoots colors all around

Talia created a glossy texture without any liner by layering on Laura Mercier Eye Basics in Flax, then Laura Mercier Metallic Crème Eye Colour in Platinum, followed by Sequin Eye Shadow in Pink Crystal and the NEW! Laura Mercier Foundation Primer in Radiance (launching December 2011). The look was finished with Laura Mercier Lip Glacé in Crystal.

The lustrous lashes were created by layering five coats of Laura Mercier Full Blown Mascara and Laura Mercier Long Lash Mascara in Black on the top and bottom lashes.

Lastly, Talia filled in the brows and extended them out a bit using Laura Mercier Brow Definer on the eyebrows.

She then made the lips pop by dabbing Laura Mercier Crème Lip Colour in Bing Cherry in the center.