Sneak peek preview of Lady Gaga gracing the cover of V Magazine (issue #67): “The New York Issue,” which features fashion and art in the most exciting city on Earth! Music legend Lady Gaga poses as the Statue of Liberty alongside designer Marc Jacobs for this cover, in which artist Dan Colen interpreted the iconic “V” using bubble gum as his medium. In total, V Magazine collaborated with 4 New York based artists for their creative take, and Colen’s is the first to be released for this exclusive preview. V67 hits newsstands TODAY, September 2nd, 2010. 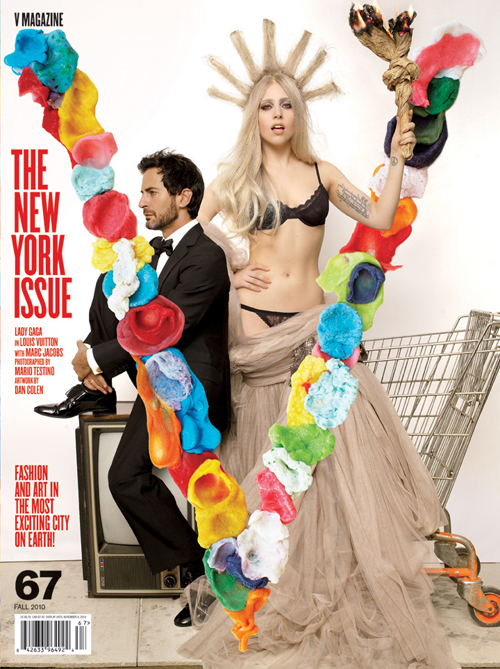 Sure, Rents Are Insane, There’s Nowhere to Party, Everyone Hates Everyone, The Subway’s A Nightmare, It’s Way Too Hot, It’s Way too Cold, The Knicks Suck, and Smokes Cost $13 a Pack. But the Big Apple is Still the Best Damn City in the Universe, And the Only Place Where You Can Be Anything You Want to Be When You Want to Be It. These 26 People Are Making The City Their Own Way.” 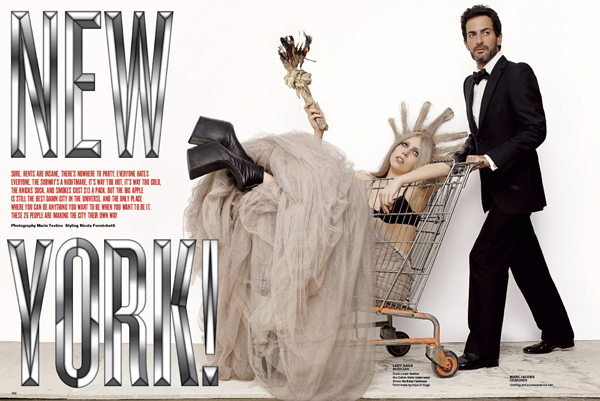 “Just as the Statue of Liberty was France’s gift to America, Gaga is, to us, New York’s greatest gift to pop culture and fashion. She embodies everything V is about, and is also a beacon of the city’s creativity and hope. Exactly one year after her first V cover (the first fashion magazine cover she was on), we decided to do the NEW YORK issue, and she was the first person who came to mind to represent our great city. In the year that’s passed, she has become a bonafide genius and we can safely declare her our muse. Above all, a New York issue should celebrate people who’ve done great things. We at V are grateful Gaga came along to put the New back in New York!”