Margherita Missoni at the 2010 MET Ball

Anthony Sorenson for Frederic Fekkai tended to the tresses of Margherita Missoni for the 2010 MET Ball. The Hairstyle & Inspiration: The Ballerina who was out all night. A grungy chic done-undone ballerina inspired up do, inspired by her Harry Winston Ruby and Diamond Headband. 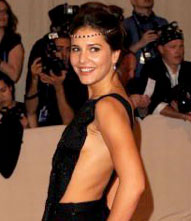 How To Get The Look: Hair Tutorial

He started by prepping the hair with Fekkai Coiff Océanique Tousled Wave Spray ($23) to create texture and loose waves.

Next, he pulled hair into a ponytail and secured at the crown. He then scrunched the hair and began pinning it loosely to create the ballerina like bun. The part was left natural and off central. The front of the hair was left loosely and secured back with the Harry Winston Headband to accentuate the face and the ultimate in glamorous hair accessories. He finished with Fekkai Coiff Sheer Hold Hairspray ($35).