GQ launches the first monthly magazine reader application optimized exclusively for the iPad, a digital version of the April 2010 issue featuring Shia LaBeouf on the cover. GQ is the first Condé Nast magazine to be available on the iPad.

“This seems not only like an exciting moment in publishing but the first bright, backlit day of a new era, so GQ is proud to be right there at the launch of it,” said Jim Nelson, editor-in-chief of GQ. 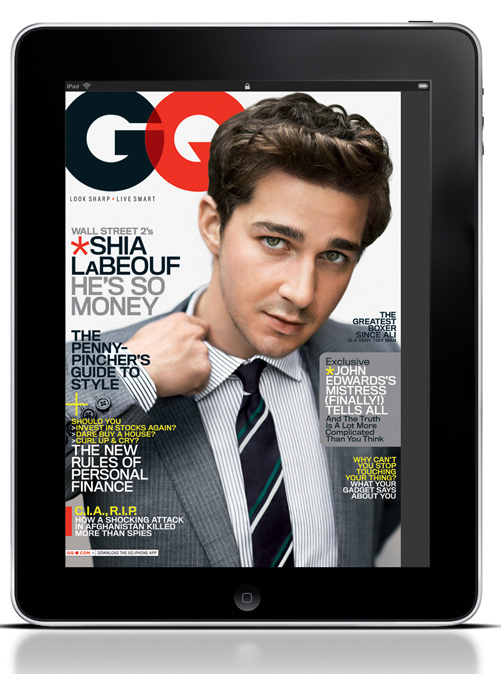 “What’s important here is that we’re using technology to complement our mission, not compete with it,” said Michael Hainey, deputy editor of GQ, who oversaw the creation of the app. “With the iPad, readers can now purchase an entire issue of GQ—every word, every photograph, every ad that’s in the print edition—in digital form. They can even buy back issues. We’re giving fans of GQ the opportunity to read GQ wherever they want to—and buy that month’s issue wherever they are. I’m very proud of what our team has accomplished and am excited about where we will go from here.”

In addition to providing all content from the print issue, the app offers two ways to read the magazine that are unique to the iPad:

a) In horizontal, or landscape, mode, readers get every spread in the magazine. Navigation is made even easier thanks to the “scrubber” at the bottom—thumbnails that show a reader where they are within the issue.

b) When the reader turns the device to portrait, or vertical, mode, they get the iPad-optimized version of the magazine. Here, users can read one story at a time and also take control of what they want to see, when they want to see it, and how: They can zoom in on photos, read captions, and increase font size.

Plus, the April issue comes with additional multimedia content not in the print issue: exclusive behind-the-scenes video from the Rielle Hunter photo shoot, bonus outtake photos, and hotlinks to songs.

Navigation is simple and easy, thanks to a pop over table of contents that a reader can call up at any time.

Finally, readers can purchase back issues (dating to December 2009 when the GQ iPhone app first became available) and create and organize their own digital GQ library.

The Audit Bureau of Circulations (ABC) has approved the app as a digital replica of the magazine, so it will count purchases towards the total circulation of the April issue of GQ. The app is available now for $2.99 from the iPad App Store or at www.gq.com. The app was developed and built in-house by Condé Nast Digital.