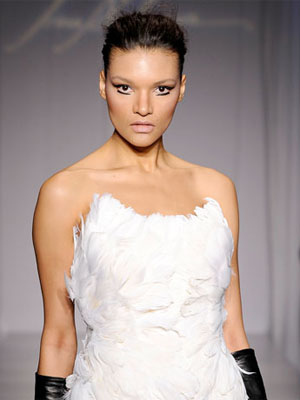 In the end I went for a neutral color palette and really played up the eyes with liner. The concept was to make it look like 2 strokes of a calligrapher’s pen around the models’ eyes and that’s exactly how it looked! Thankfully working with beauticontrol as our sponsor we had no shortage of amazing color palettes to work with and their emphasis on ‘age defying’ formulas landed hand well in keeping the look smooth and dewy.

Irina Shabayeva was absolutely amazing to watch work! Having met and worked with Rick Goings as well I thought they were fantastically teamed to bring this line to life. I myself had a brilliant time working with this concept and thanks to the generosity and product of the people at BeautiControl Irina and I were able to capture the same beauty on the model’s faces to compliment the collection. Working with Irina, Rick, Rodney Cutler and BeautiControl made the entire process a wonderful one that we all walked away from both proud and artistically fulfilled.”-Kate Bazazian