Introducing Diesel Only The Brave Iron Man Limited Edition an exclusive version of Diesel’s men’s fragrance inspired by the upcoming film. With the premiere of one of summer’s most anticipated blockbusters – Iron Man 2 – only a few days away, celebrate superhero bravery with Diesel’s new limited edition fragrance. 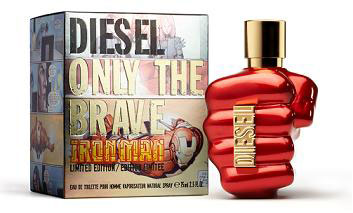 Taking inspiration from the season’s most daring, fearless, courageous action hero, Diesel introduces Only The Brave Iron Man Limited-Edition, celebrating bravery on the big screen. In honor of Iron Man’s epic feats, Diesel is reimagining its signature Only The Brave fist design in bold red and gold colors for a limited time, evoking the power and strength of the upcoming film’s leading man. The fragrance is housed in a one-of-a-kind box featuring strips from the original Iron Man comic.

Inspired by visionary artists, icons and rebels, Only The Brave is for men who take a stand and control their own destiny, seizing opportunities and making a difference. The scent represents the qualities of the brave, symbolized by a fist that tells several stories: facing forward, the fist evokes power and energy; upright, it stands for self-affirmation; raised, it signifies victory, success and engagement.