Evan Rachel Wood at the London Premiere of Ides of March

TM& Marta Walsh has got the word that…celebrity hairstylist Marcus Francis worked with Evan Rachel Wood at the London premiere of Ides of March on Wednesday, October 19th, 2011. 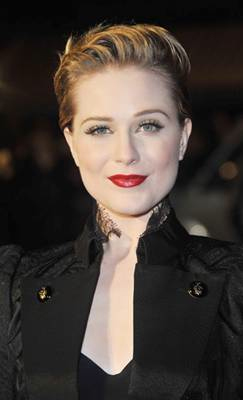 Evan Rachel Wood at the London Premiere of Ides of March

Hairdo Inspiration: “Evan wears glamour so perfectly, it’s as if she were a part of old Hollywood. I thought channeling a version of Jean Harlow could show her shape and texture can work in different ways even with short hair.”

How to get Evan Rachel Wood’s hairstyle:

“It’s best to start with dry hair the day after you’ve shampooed it so there’s a good base of texture. Lightly apply Fekkai Tousled Wave Spray throughout the hair and work in with your hands while blow drying. Using a 1/4″ curling iron take small sections of hair on the top and wrap from roots to ends in the same direction throughout the hair. Only hold for two seconds to avoid too tight of a curl. Follow this same technique on the top of the sides and back. Spray with L’Oreal Elnett Hair Spray over the entire head and let it set for 10 minutes. Next firmly brush out with a Mason Pearson paddle brush, and begin to sculpt into a uniform wave pattern using Pantene Restoratives Smoothing Balm. To keep the sides molded close to the head, use Jonathan Dirt while pressing the hair down and the blow dry the area on low heat. Give the front a little height using a comb to lift the hair, spray with L’Oreal Elnett Hair Spray and blow dry on low to hold.”