Katherine Heigl At The One for the Money Film Premiere

Katherine Heigl, in her newly released movie, “One for the Money” plays the unemployed and newly-divorced brunette Stephanie Plum, who lands a job at her cousin’s bail-bond business. Of course, her first assignment puts her on the trail of a wanted local cop from her romantic past. 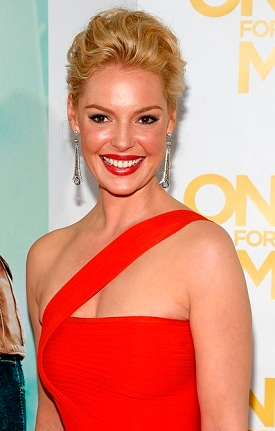 How To Get Katherine Heigl’s Hairdo

At the premiere on January 24, 2012 in New York, celebrity hairstylist David Babaii created her red carpet look using Grace Kelly as his inspiration. To transform your tresses from brown to a “Hollywood Blonde” David recommends using the professional hair color Aquarly 20/20 by IT&LY HAIRFASHION to achieve a long-lasting, natural and healthy looking shade.

To create this Grace Kelly inspired look, David started with IT&LY’S Advanced Color Protection Shampoo and Conditioner. After gently towel drying, he applied a small amount of Miracle Oil Hair Elixir by David Babaii for its intense conditioning benefits, superior color preservation and thermal protection. Next, after blow drying, he used a medium sized curling iron creating curls and directing them off the face and under. To style, David lightly back brushed the fringe area for some height and smoothed this lightly with a medium paddle brush. He continued the style by using his fingers to loosen the curls into soft waves and drawing all the hair into a loose chignon toward the back of the head and securing with silver coated bobby pins. David finished the style with IT&LY HAIRFASHION’S Pure Definition Hair Spray.