Looks like Kim Kardashian has found a new workout partner in Heidi Klum this week! While filming her spot as a guest judge on Project Runway a couple of days ago, Klum invited the reality star to hit the pavement for her AOL Summer Run in New York City this weekend. Kim’s been exercising extra hard to get ready for her wedding, while Heidi, the insanely hot mom of 4, will be in her workout gear consistently for the next few months as part of her AOL Summer Run. 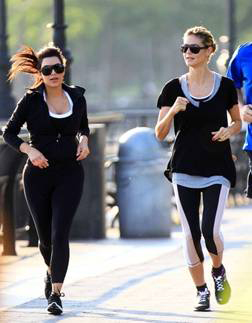 Klum wrote after her run with Kim: “Just going back to what I said yesterday, it’s always good to work out with a buddy! My friend, Kim Kardashian, ran with me this morning. She was awesome! We took a walking break and she was the one who pushed us to start running again. We did 4 miles!”

Klum started an eight week Summer Run on her new lifestyle website, HeidiKlum.aol.com to get healthy and encourage other women to join her in doing the same. Each day Klum will be logging her miles and blogging about her daily runs to share her progress with readers and check out what they are doing too and answer any questions they have. Klum started the daily program a week ago and has already logged over 32 miles — and counting!

You can join Klum on the summer run to health by signing up for her AOL Summer Run at http://heidiklum.aol.com/category/summer-run.