I’m excited to share with you my interview with actress Kirsten Lea. In this interview Kirsten tells about her passion for film and acting. Landing a female lead in Walk a Mile in My Prada’s a film directed by Joey Sylvester. The people who inspire her the most, makeup bag, and future plans. 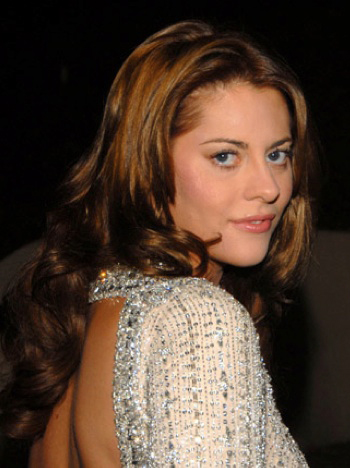 Marta Walsh: Where do you call home?
Kirsten Lea: The Hollywood Hills!

MW: When did you first become interested in film and acting?
KL: These are two separate questions. I first became interested in acting at prep school. They were putting on a children’s play of the Wizard of Oz and my best friend suggested that we audition. I had no idea how to audition. I recall asking one of the teachers, “how do I know what part to audition for?” and she told me to read for the part of Dorothy. I got the part but it didn’t teach me how to decide which part to audition for. I think they just saw I would have the confidence to do whatever they asked me to do in front of an audience and that I would work at learning lines until I got it right, which I did. I loved that play. From the first time I performed, I knew I would be an actor. My father wanted me to be an actress so I had a lot of support from him. He would film every play I was in and we would re-watch it and go over my performance. He worked in the industry so he would often take me to theatres and television studios where he was working and put me on stage before the show started, he’d say I had to warm the stage up for him, so I would have to improvise. My interest in film came later. My mother would take me to the local video store every weekend to rent a movie. I would spend hours talking to the girl who worked there about all the new films.

That was an excellent era in film – Ferris Beullers Day off, The Secret of My Success, Weird Science, Top Gun – they were films we would watch over and over again. My mother allowed me to watch almost anything, except Nightmare on Elm Street. I have no idea why she was against that film in particular. I had seen Commando, Platoon, Full Metal Jacket, Hell bound Hell raiser, Friday the 13th… which are pretty violent films.. But she wouldn’t let me see Nightmare. In the end I managed to rent it without her knowing. I was thinking, “this film is going to be so gruesome!” and it was such a disappointment. I started a magazine when I was 13 in which I critiqued films. I also had an extensive private collection of VHS, so if you bought a subscription to my magazine then you could rent any of my VHS for a one off membership fee. I made these cool membership cards for everyone. It was my version of Netflix.

MW: What were your first big breaks as an actress?
KL: My first lead role was in The Wizard of Oz and I was able to sing solo in that as well. I was featured in the film The Soloist, directed by Joe Wright, which was released last year, but my lines were cut. However, that was the role that got me to move out to Los Angeles permanently. I landed the female lead in Walk a Mile in My Prada’s in March this year. The film will be released later this year and I’m very proud to be a part of it. They often say you have one film that makes you known to the Industry and one that makes you known to the world. I hope this film will make me known to the Industry.

MW: What would be your dream acting role?
KL: My dream acting role will be the one that makes me known to the world. I would have loved to have played Kate Winslet’s character in Titanic. That film had incredible wardrobe and set design. I have my favorite directors who I would love to read for, but it always depends if there is a suitable part. I’m hard working and prepared so my luck will come with the opportunity of a suitable role.

MW: Who and what inspires you?
KL: It’s a cliché but I’m inspired by nature. I don’t see nature as a separate entity to myself. I see nature as an extension of myself, but a phenomenal one. I find fire to be very motivating and water calming. I’m often inspired by my friends. I have a friend is a great writer and he inspires me to write. I have two female friends who are both incredibly talented comedic actors, they both inspire me in terms of my acting and comedy. I have another girlfriend who works at Vogue – she inspires me she inspires me to dress well and maintain good posture on the red carpet and my best friend in London, is a well known make up artist – she inspires me to always use fresh cotton wool for cleaning each eye, to ensure eye hygiene. I have good people around me.

MW: What’s in your makeup bag?
KL: In my make up bag – Clinique pressed powder. Nars orgasm blush. Chanel Mascara. YSL touché eclat and a Clinique mini rose lip gloss. Plus a tinted lip balm and a mini sun block. I don’t wear eyeliner. I’m all about the blush.

MW: How would you describe your style and who are your favorite designers?
KL: My style is very “Kirsten Lea.” I’m not afraid of being the best dressed. My favorite designers are Dior, Armani, Chanel, Victoria Beckham and Ralph & Russo.

MW: Which film have you ever watched on a date?
KL: I’ve watched so many films on dates before. My very first proper date where I was taken to the cinema was to see Pulp Fiction. That’s something I’ll never forget. One filmmaker invited me to his home, where he has a cinema in his home. He had put together a 35mm with trailers at the beginning and end. He’d spent time putting it together, which was very special and very romantic.

Another date, someone took me away for the weekend by private jet and had found my top five films, which he laid out for us to watch. That blew me away. I had one very special date in Palm Beach, where we went to see The Last Song with Miley Cyrus. I have no idea why we went to see that, I don’t think there was anything else I hadn’t seen. We were the only two people in the theater other than two teenage girls. The film was very teeny. Then suddenly there was a sequence where where sea turtles hatched and began running into the sea, it was filmed so well and really touched me. I started crying and the film got better and better from that point on. It was a great film. We took a romantic stroll afterward, it was a special evening. I love taking a stroll after watching a movie.

MW: What one or two things some people may not know about Kirsten Lea?
KL: I’m very passionate about films and film making. That’s probably obvious already! I studied Interior Design before I moved to LA. Last year, I bought a home in the Hollywood Hills and have been renovating it ever since. It will be ready later this year and I am so excited for it to be finished. It has a Zen garden and Zen water feature that I designed. The powder room is ‘Old Hollywood Style’ but the master bathroom is the piece de resistance. It has the most incredible make up cabinetry – these cabinets have only been on the market about 3 weeks and I’m so excited to have them installed. They have special LED lighting that perfectly frames your face for applying make up. I had room for a double vanity, but I only had one basin installed so all the remaining space can be used for my creams and make up. I have so many face creams and lotions, mostly La Prairie. I have an interior design company that I hope to launch next year when my home is complete. My home will act as a showroom for my clients.

MW: What’s next for Kirsten Lea?
KL: While I’m completing the renovations on my home, I’m preparing for a film that is due to start filming filming very soon. Meanwhile, I’m starting to work with two charities. One will be a children’s charity and another will be raising awareness about sugar based bio-plastics. Walk a Mile in My Prada’s is due to be released later this year.