The World of Polo. Polo Modern Reserve, Polo Blue and Polo Black. A wardrobe of fragrances for every facet of today’s modern man

Inspired by rich traditions, fascinating people and iconic places, Ralph Lauren creates a universe of style that gives form to our dreams and aspirations. Men around the world look to him as a model for living abundantly by embracing a variety of experiences. Like Ralph Lauren, the Polo man is quintessentially modern. He leads a full life comprised of many lifestyles and inhabits a world of his own making – the World of Polo. 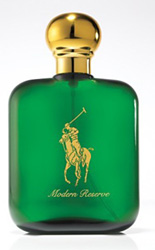 The World of Polo is a trilogy of fragrances – Polo Modern Reserve, Polo Blue and Polo Black – that expresses three facets of today’s Polo man: Traditionalist, Sportsman and Urban Sophisticate.

Ignacio “Nacho” Figueras, world class professional polo champion, is the face of The World of Polo’s print campaign that was shot by renowned photographer Bruce Weber. Appearing in the advertising for Polo Black since 2005, Nacho will now be the official spokesmodel of Polo Blue and the latest men’s fragrance introduction, Polo Modern Reserve. Nacho will also star in a television commercial that depicts the three fragrances directed by Weber.