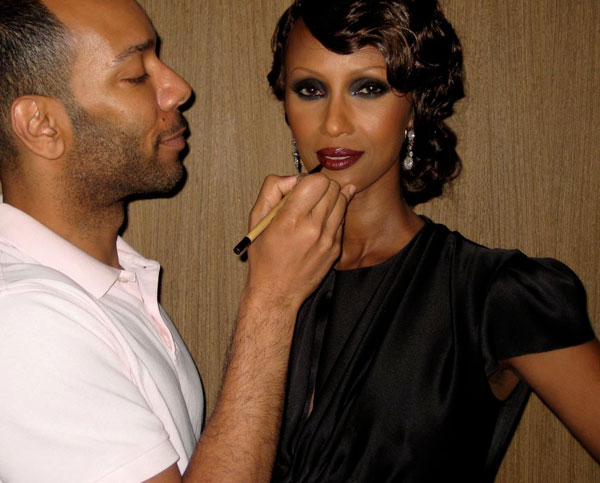 SKIN: Every look that walks the red carpet begins with flawless skin. I start by using Iman’s Second to None Luxury Radiance Liquid Makeup Enriched with Minerals (in shade 2) to highlight and conceal the under eye area. Then I uses Iman’s Second to None Stick Foundation in the same shade to achieve a flawless complexion that not only looks great on the red carpet, but lasts though the night!

SKIN: After using Iman’s Semi-Loose Powder Enriched with Minerals (in Earth Medium) to set foundation, I dust bronzer near the hairline and sweep onto cheeks to add a luminous glow to the skin. Bronzer also takes the place of blush and can be worn both day and night!

EYES: A smoky eye is one of Iman’s favorite eye statements! I begin creating a smoky eye statement by using a dark shadow nearest the lashline and bringing it up past the crease of the eye, then using the same dark shadow underneath the eye to add drama and definition. Topping this off with a shimmering gold shadow on the browbone and lining the inner rim of the eye in black for added drama. And no red carpet face is complete without false lashes and a couple of coats of mascara! Iman Cosmetics Luxury Eye Defining Powders in Black Magic, Vixen & Bewitched are great for adding shimmer to the eye area.

LIPS: I wanted to dress each feature of the face, so I lined the mouth with a deep brown pencil and filled in the lip with a bourdeaux shade of lipstick, Iman Cosmetic’s Luxury Moisturizing Lipstick in WildThing, to make the look sensuous, striking, and oh, so sexy!