Jessica Alba and Emily Blunt in Hourglass Cosmetics Makeup at the 2013 Golden Globes. 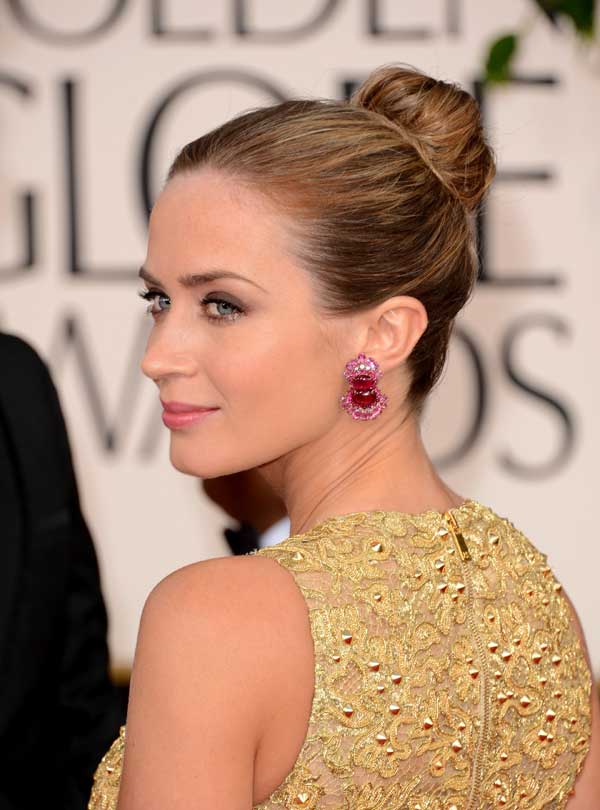 Emily Blunt. Do you love?

In a gilded dress by Michael Kors, Emily Blunt more than lived up to her reputation as a Hollywood golden girl. The actress, nominated in the Best actress, Musical or Comedy category for Salmon Fishing In The Yemen, “definitely had something in mind as far as the look,” says makeup artist Jenn Streicher. “Emily wanted smoky eyes paired with soft pink lips that echoed her Lorraine Schwartz ruby earrings.”

Skin: Jenn began by using Kate Somerville Quench Hydrating Face Serum, La Mer The Moisturizing Soft Cream and La Mer Eye Concentrate. She then primed the skin with Hourglass No. 28 Primer Serum, and followed with Hourglass Illusion Tinted Moisturizer in Ivory. She used two shades of Hourglass Hidden Corrective Concealer: Fair, a light shade, was used around the nose and as a highlighter, and Sand, a slightly darker shade, was applied under the eyes. Jenn completed the skin by applying the new Hourglass Ambient Lighting Powder in Radiant Light all over the complexion. Available in six different lighting settings, Ambient delivers a multi-dimensional luminescence to the complexion by capturing, diffusing and softening surrounding light. “It softens and enhances everything,” says Jenn.

Cheeks: Jenn applied Hourglass Superficial Waterproof Bronzer all over the face and neck to create a radiant glow. She then used the bronzer shade from Hourglass Illume Crème-to-Powder Bronzer Duo in Sunset to contour the cheeks and jaw line. The blush shade from Illume was applied onto the cheekbones.

Eyes: She started by lining eyes with Hourglass Film Noir Kohl Eye Pencil in Espresso and softened the line with a brush. Jenn then applied the shell shimmer shade from Hourglass Visionaire Eye Shadow Duo in Gypsy as a highlight on the brow bone and followed with a matte brown eye shadow on the lid. Hourglass Film Noir Full Spectrum Mascara was applied to the lashes to volumize, lengthen and separate them. She then amplified the brows with Hourglass Arch Sculpting Brow Pencil in Soft Brunette. 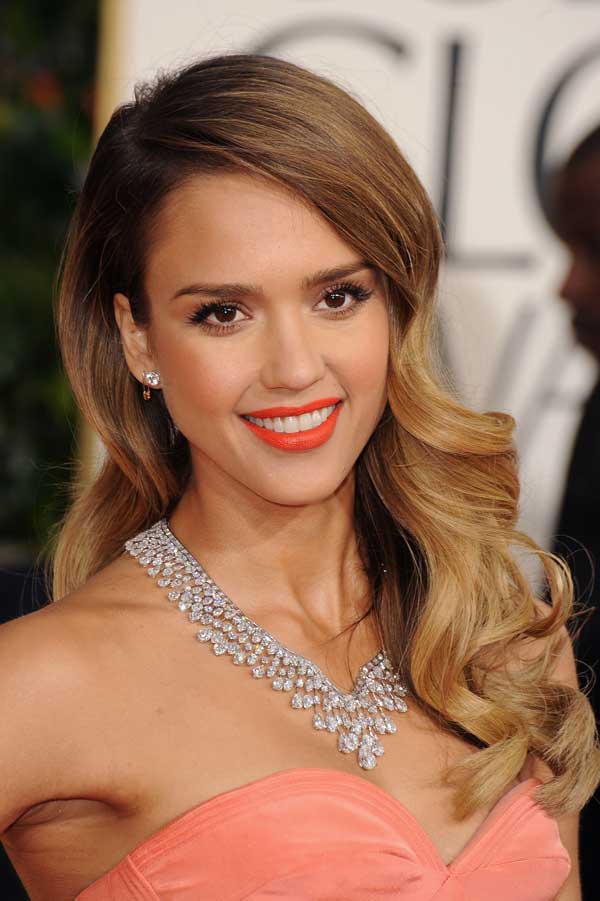 On Sunday’s red carpet Jessica Alba looked stunning in tangerine. The glamorous mother of two, a presenter at the awards ceremony, wore a gorgeous peach-colored gown by Oscar de la Renta. “The dress was the inspiration,” says makeup artist Lauren Andersen. “I loved the contrast between her glowing skin and the matte orange lip. It’s an almost tropical pop of color that’s not an exact match for the dress but close.”

Skin: Lauren prepped the skin with Hourglass No. 28 Primer Serum, and followed with Hourglass Illusion Tinted Moisturizer in Sand. She then used Hourglass Hidden Corrective Concealer in Warm under the eyes, down the bridge of the nose and fanned the product out in the center of the forehead to create dimension. She finished the skin step with the new Hourglass Ambient Lighting Powder in Radiant Light applied all over to create a golden, subtle warmth. “It’s a soft, refined shimmer that’s glowy,” says Lauren.

Cheeks: She used the bronze shade from Hourglass Illume Crème-to-Powder Bronzer Duo in Sunset to contour the cheeks and followed with the blush shade on the apples of the cheeks.

Eyes: Hourglass Film Noir Kohl Eye Pencil in Espresso was first applied to the outer corners of the eyes and then smudged it with a brush. Lauren then applied Hourglass Superficial Waterproof Bronzer in the crease of the eyes and the gold shade from Hourglass Visionaire Eye Shadow Duo in Dune on the lids. Lashes were treated to several coats of Hourglass Film Noir Full Spectrum Mascara. She finished up by amplifying the brows with Hourglass Arch Sculpting Brow Pencil in Soft Brunette.

Lips: Finally, Hourglass Opaque Rouge Liquid Lipstick in Riviera, a vibrant tangerine shade, was applied to the lips. The velvety matte color delivers richly pigmented and long-lasting coverage for up to 14 hours.