Madonna At The MDNA Tour Documentary 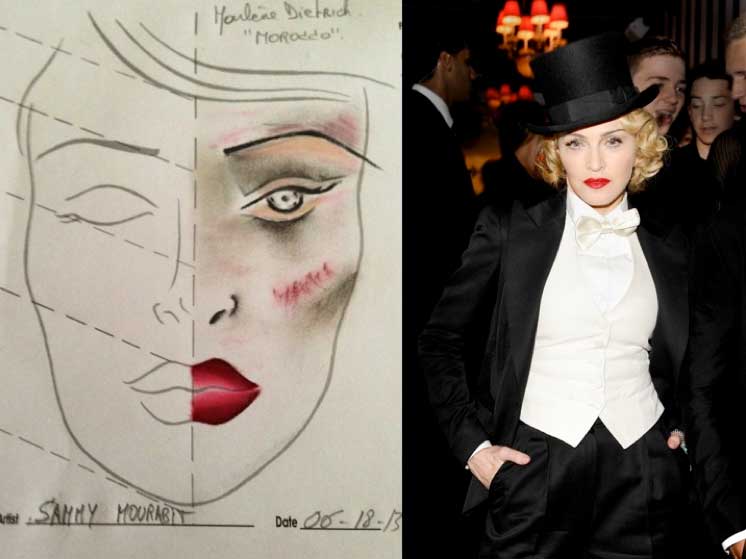 To achieve Madonna’s flawless complexion, Sammy first hydrated her face with Votre Vu Attentive Crème de Jour for Sensitive Skin without forgetting the neck with Portrait Collar Restorative Neck Crème. He then dabbed Votre Vu’s Love Me Deux Concealer in Champagne under her eyes and also on the darker areas of her skin, to even out her skin tone.

HOW TO GET Madonna’s makeup Look

One of the tricks he used was mixing the Love Me Deux Nourishing Moisture Tint in Champagne with the Attentive to achieve a dewy look. Next, he accentuated her cheekbones by contouring them with Votre Vu’s Beaute en Bronze Tantalizing Bronzer Duo.

To create a 30s eyebrow, he first groomed the brows with a brush, and then applied the Arch de Triumphe Daily Brow Definer in Warm inside the natural eyebrow line. The thinner line captures that 30’s look. To cover the excess natural hair, he dabbed some Votre Vu’s Love Me Deux Concealer in Champagne, giving the illusion of a clean groomed eye without the need for over-plucking.

For the lips, Sammy first contoured them in a heart shape reminiscent of the 30’s style with the Drawmatic Lip Liner in Naked (coming out in September). He followed by mixing two shades of the French Kiss Moisture Riche Lipstick (coming out in September) for a luminous and voluptuous effect. He applied the darker tone, Margaux, to the outer lines of the lip and the lighter tone, Annette, to the inner lip.

On the lashes, he used Eiffel Power Mascara only in the center of the eyelashes. To intensify the 30s look, he added some false lashes to the outer corner of the eye.

The last touch was the Vu-On Rouge in Bouquet Rose on her cheeks and a little bit of the Belle Poudre HD Sheer Face Finish in Light. The result was a modern Marlene Dietrich look.