MAC Cosmetics and the MAC AIDS Fund introduce their new Viva Glam spokeswomen: Lady Gaga and Cyndi Lauper. As part of the “From Our Lips” campaign, MAC will introduce Viva Glam Gaga and Viva Glam Cyndi lipsticks. Each lipstick will retail for at $14.00 with 100% of the selling cost donated to the MAC AIDS Fund. 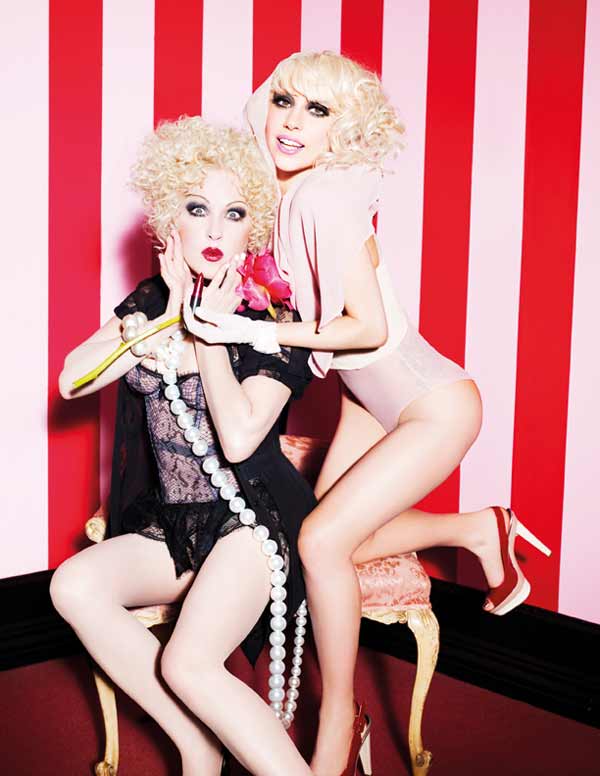 The MAC AIDS Fund, the heart and soul of MAC Cosmetics, was established in 1994 to support men, women and children affected by HIV/AIDS globally. It is a pioneer in HIV/AIDS funding, providing financial support to organizations working with underserved regions and populations. To date, the MAC AIDS Fund has raised over $150 Million in 67 countries exclusively through the sale of MAC’s VIVA GLAM Lipstick and Lipglass, donating 100 percent of the sale price to fight HIV/AIDS.

You used to sing to Cyndi Lauper as a little girl and now she is a big fan of yours. How does it feel to be working with her on the new M·A·C VIVA GLAM campaign?
She has such a beautiful spirit, and the best thing about her is that she’s a really genuine person. She gave me some pointers at the VIVA GLAM shoot. We have so much in common, and we just really enjoy one another. It’s surreal.

M·A·C VIVA GLAM Lipsticks and Lipglasses have raised over 150 million dollars for the M·A·C AIDS Fund to help people living with HIV/AIDS around the world. How do you feel about this?
I’ve been familiar with this campaign since it began, and I’ve always respected M·A·C for what it stands for – ALL AGES, ALL RACES, ALL SEXES. This is more than just makeup. Anything I can do to help raise money for HIV/AIDS awareness – that’s what I’m here for, and I’m very honored to be a part of this.

You are very theatrical and creative in your performances and even create your own outfits. How important is makeup to your performance?
I’ve been wearing M·A·C since I was 10 years old. I see vanity as a form of identity and lifestyle. M·A·C always has shocking and outrageous VIVA GLAM spokespeople.

How does it feel to join the likes of Boy George, Ru Paul, and Lil Kim?
To be joining the likes of iconic former VIVA GLAM spokespeople is an honor. I can’t believe I’m here. I am truly grateful and excited to do whatever I can for AIDS awareness.

You got your start performing on the club scene, which has a largely gay audience, and a part of the population that is very susceptible to HIV/AIDS. How do you think you can send a message to them about HIV/AIDS prevention or education?
Considering how rooted I am in the gay community and the deep respect I have for them, research and charity work for this cause is very important to me. By being vocal and raising awareness about HIV/AIDS and being as outspoken as possible on this subject we can raise awareness and protect the health of those we love. But it isn’t just the gay community. It’s all communities, and this is an important message to relay to the younger generation.

Women account for almost half of the HIV/AIDS cases around the world. You and Cyndi are both strong, vocal women, and the two of you create one very powerful voice. What would you say to young women today about HIV/AIDS?
Use protection, and be selective and strong about those you love. Your body is sacred, and it’s ok to say no. Make your partners get tested, go together: it will only make your relationship stronger and healthier.

You and Cyndi have seen two very different stages of the AIDS epidemic and the changes in the public’s perception of the disease. In the ’80s people were dying daily and today people with HIV/AIDS are living full lives. As a young person, do you think that today’s youth feel they are not at risk for the disease?Certainly the public perception is very different now than it was in the ‘80s, because (and this is good news), we have more ways to control the virus today than we did before. However, this is precisely the reason VIVA GLAM is so important: were taking a commercial organization and using its values of strength and identity to raise CURRENT awareness in the EXISTING public sentiments about AIDS.

You are a music icon with fans from all over the world. You are a fan of Lady Gaga’s, and she is a big fan of yours. How does it feel to be doing a M·A·C VIVA GLAM campaign together?
I am really looking forward to it. Lady Gaga is the undisputed breakout star of the year, and I have been cheering for her. She’s a very cool and different artist. As far as working together on this campaign, we share a passion for fashion and music and performance. And yes, cosmetics. I think we are going to have a blast.

HIV/AIDS was ravaging the world in the early ’80s, a time when you were becoming one of the most important female singers in history. How did AIDS affect you during that time?
I lost a lot of dear friends to AIDS before we even knew what it was. People are still dying more than twenty years later, and we have to help find a cure. The M·A·C AIDS Fund has supported numerous GLBT organizations around the world.

You have also been a vocal advocate for gay, lesbian, bisexual and transgender equality and cofounded the True Colors Fund. What motivated you to do this?
I’m not a politician. I am just a mom who happens to have the benefit of being famous and can bring attention to something that is wrong and needs to be righted. I think standing up for one another is something that we all have to do. So that we all count. I want my son to live in a country free of bigotry and hatred. That won’t be possible until we all have the same rights – that one segment of our population isn’t given less so therefore can be treated as less, ya know?

Tell us about your new VIVA GLAM Lipstick/Lipglass colour?
A really fabulous red…and it’s called Cyndi. How cool is that? M·A·C VIVA GLAM Lipsticks and Lipglasses have raised over 150 Million dollars for the M·A·C AIDS Fund to help people living with HIV/AIDS around the world. How do you feel about this? I am very proud to be involved with the M·A·C AIDS Fund, and I am very glad to lend my name and time to help raise money for people living with HIV and AIDS.

Women account for almost half of the HIV/AIDS cases around the world, and your new VIVA GLAM campaign will focus on helping women living with HIV/AIDS. You and Lady Gaga create one very powerful voice. What would you say to young women today about staying safe from HIV/AIDS?
Be smart, be careful, protect yourself, practice safe sex and look out for your sisters to make sure they are doing the same. But there are also huge populations of women in many places like South Africa and in the Congo who are becoming infected through rape. For them, I ask the world to stand up and get involved. They are all sisters, mothers and daughters, and they need our help.