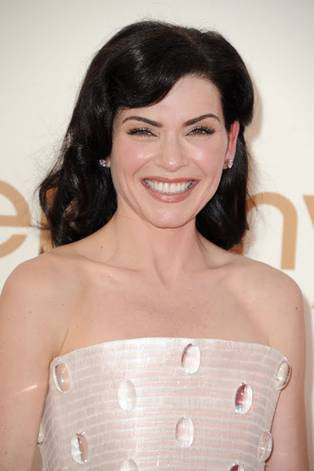 “For Julianna Margulies’ Emmys look, I wanted to mirror the glamour of her gorgeous Armani prive gown with an old Hollywood, Veronica Lake-inspired style. However, I still wanted Julianna to look modern, so I kept the style somewhat deconstructed.

I started with damp hair and worked Leonor Greyl’s Lait Luminescence Bi-Phase Detangling Milk through her hair, applying the product only from the mid-shaft down through the ends so as not to over-saturate it.

To create volume, I combed Leonor Greyl’s Mousse au Lotus Volumatrice through the hair with a wide-tooth comb and blow-dried it using a two-inch round brush. I made a deep side part on the left and then set the top portion of her hair in Velcro rollers for a little bit of extra oomph.

Then, I started to work on the back:

· Making sure to spray Leonor Greyl Voluforme Styling Spray for Volume and Hold to each section before curling, I used a 1½ inch curling iron to barrel-curl the bottommost layer of Julianna’s hair in a uniform direction

· I created another layer on top of that one, barrel-curling the sections but this time changing the direction of the curl from that of the first layer

After completing the back of Julianna’s hair, I removed the top half from the Velcro rollers and brushed through with a boar bristle brush, creating a soft wave with my fingers.

To complete the look, I finished with a spray of Leonor Greyl’s Laque Souple Light Styling Spray for hold.”