Heidi Klum at the Emmy Awards 2009: Get The Look 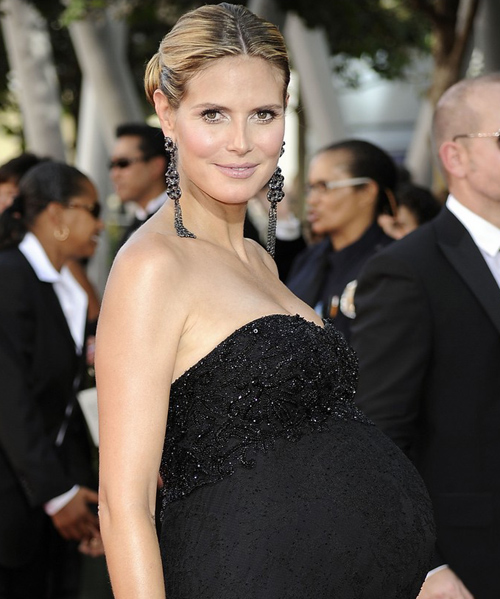 Michel created a Fifties inspired up-do with a modern interpretation – ultra feminine with a bit of volume. To get the look he crafted soft texture with slight waves pulled back to softly frame the face. A strong middle part was accented by a chignon positioned back of the head at ear level. Michel started off by applying Fekkai Coiff Bouffant Gel to create some texture and then blow-dried the hair. Once dry, he applied Fekkai Coiff Oceanique to create the soft waves. He created a middle part and two pony tails in the back of the head at ear level, making sure the hair in front is smooth but pulled back softly. He teased each ponytail to create the volume and then brought together into one dramatic chignon. Aleman finished off with the Fekkai Advanced Brilliant Glossing Sheer Shine Mist.

Products all by Fekkai:

The simplicity of Heidi’s gown inspired Linda to keep her makeup minimal and fresh. She used a palette of pale pinks and apricots for her eyes and cheeks. To begin Hay used Brightener around her eyes, nose, and the corners of the mouth, blending everywhere to even out Heidi’s complexion. She followed this with a very light touch of cream powder blush on the cheeks.

On the eyes Hay used a selection of pale pink and lavender shadow’s from Victoria’s Secret, applying the pale pink to the lid using a flat shadow brush, lavender in the crease using a pointed shadow brush and a silver to highlight just under the eyebrow. Under the eye Hay applied a touch of lavender using a small pointed shadow brush and then added a touch of silver to the inside corner of the eye to make it pop. Next she curled the lashes + applied 3 layers of Black Mascara to the top and bottom. Individual lashes were applied to the outside corners to make the eyes pop. The lips were lined with a nude lip liner then painted with a beige lipstick. She finished off Heidi’s look with Victoria’s Secret Body Perfecting Spray to make her skin glow.