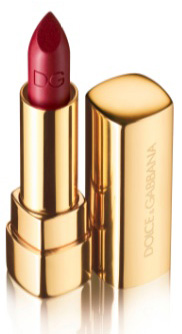 The debut of Dolce&Gabbana The Make Up during Milan Fashion Week has piqued the interest of fashion and beauty lovers prior to its U.S. arrival, and with this anticipation the collection’s Classic Cream Lipstick in Dahlia has emerged as an instant favorite. The deep red shade premiered on Dolce&Gabbana’s Fall/Winter 2010 runway and now Dahlia has garnered a wait list at Saks Fifth Avenue nearly a month prior to the official on-counter date of April 24.