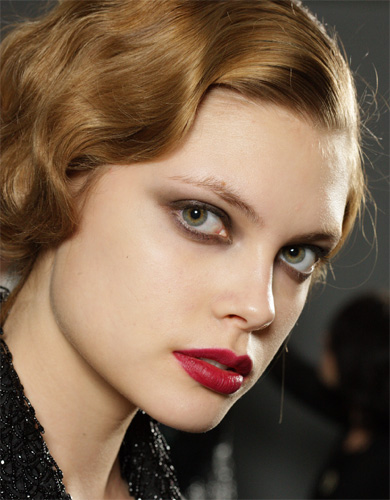 “Elegance is refusal.”-Diana Vreeland. This simple quote perfectly summed up the L’Wren Scott Fall 2009 show, for which Aaron De Mey, Lancôme’s artistic director for makeup, was the lead artist. Instead of hundreds of guests, a jammed backstage and models wearing layers of bright clothes and accessories, everything was calm-and as chic as could be. Only a few dozen guests were invited to attend the show, held at the all-white Gagosian Gallery in New York’s Chelsea art district. The atmosphere, and the clothes, were all about a sultry minimalism, sexy rather than spartan. 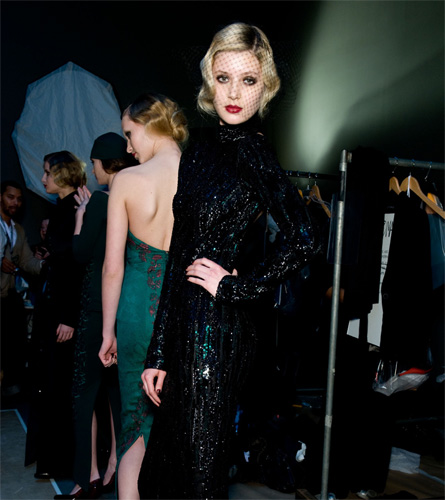 Backstage hummed with activity as Aaron and his team interpreted L’Wren’s beauty inspiration-the French women in Jacques Henri Lartigue’s iconic black and white photos from the ‘20s and ‘30s. The smoky eye was a must, of course, and Aaron relied on an unusual trick to achieve it. First, he swept black eyeliner along the upper and lower lash line and coated lashes with ÔSCILLATION VIBRATING MASCARA. Next, he held the flame from a lighter against a white plate, mixed the resulting black soot with a clear JUICY TUBES right on the plate and dabbed his concoction onto the models’ eyes. (Don’t try this at home! You can use Aaron’s COLOR FEVER GLOSS in Piha Black on eyelids instead.) Brows were left natural and brushed into place. 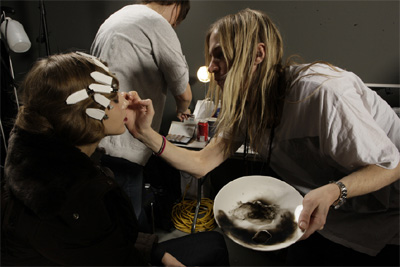 Aaron continued the moody theme with COLOR FEVER LIPSTICK in Berry Sensual, a matte shade from his upcoming Fall 2009 Declaring Indigo collection, which he applied with his fingers; a lip brush quickly cleaned up the lines. The nails, done by top editorial manicurist Yuna Park, were a matching shade of burgundy, the limited-edition LE VERNIS in Rouge Bordeaux. With so much color intensity on the eyes and lips, a clean and pretty complexion was key. 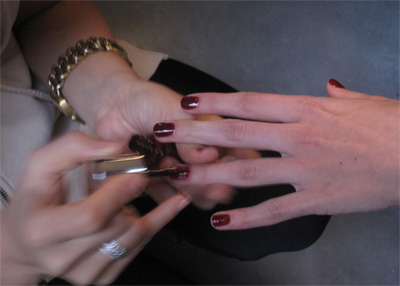 Shu Uemura MATTE LOOSE FACE POWDER did the trick, as did Yves Saint Laurent’s TOUCHE ÉCLAT under the eyes to lift and brighten. COLOR DESIGN CREAM BLUSH in Freeze Frame, applied under the eye near the temple and down the center of the nose, was used as a highlighter. The finishing touch for a few models? A loose mask of fishnet fabric delicately framing the face. 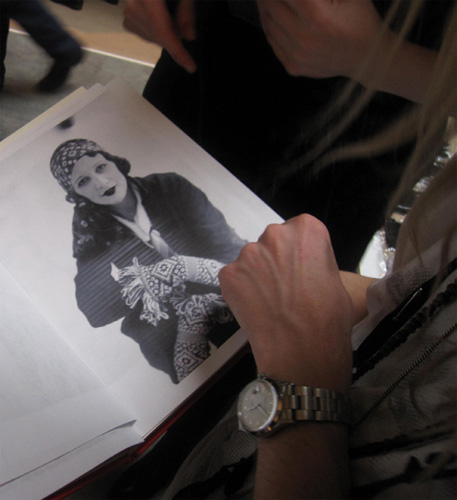