All Posts Tagged With: "Marion Cottilard"

Marion Cottilard at the 2010 Golden Globes

Manicurist Deborah Lippmann polished off some of Hollywood’s hottest looks at the Golden Globes on Sunday. Past Golden Globe winner Marion Cotillard wore Don’t Tell Mama. The young and modern shade was the perfect accent to her green Dior gown. 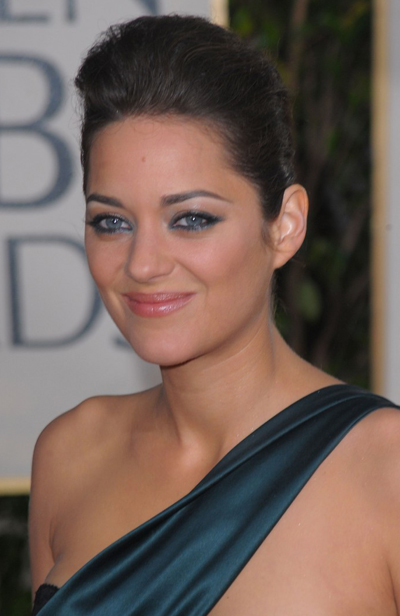 “I wanted a look that was glamorous, but with an edge,” said Vetica, “and was inspired by the rock and roll pompadours of the 50s, further strengthened with a sleek, modern French twist. Since shiny, healthy-looking hair was essential to the look, I first applied argan oil-infused Moroccanoil Treatment to wet hair, and blow dried it straight using a diffuser to keep a bit of natural texture. Then I pincurled the entire head front to back, so that hair would easily flow back and up into the pompadour shape. After releasing the pin curls, I ran Moroccanoil Hydrating Styling Cream through the hair with my hands. After brushing back and up, I back combed the top, and pulled the sides back tight, leaving some volume on top. Next, I twisted the hair into a tight french twist which was then asymetrically attached with eye-catching diamond hair clips created by Chopard. I fishined the look with a light misting of Moroccanoil Glimmer Shine Spray to give Marion’s hair a beautiful, naturally luminous shine.”