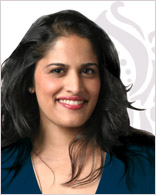 With roots that reach deep into the Indian sub-continent, Thevi was born of Sri Lankan parents in New York State. As a young woman, beginning her career and enjoying a busy social life, Thevi could never find cosmetics in shades that suited her coloring. She felt a keen need for a prestige makeup brand with colors that were rich and vibrant without being harsh, and Thevi Cosmetics was born.

Thevi represents the New Ethnic Market: light-to-dark skinned woman of Asian, South Asian, Hispanic, Middle Eastern, and Mediterranean descent. And we think it’s brilliant! Because finding the right shade of foundation is a key to a flawless face. There is still a room for expanding the makeup color scheme, and thanks for visionaries like Thevaki Thambirajah for making it happen.

Talking Makeup tried few of Thevi products and we are impressed. The quality of ingredients is definitely there.